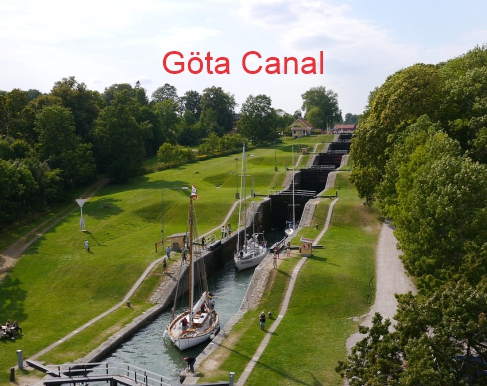 Constructed in the 19th century, Göta Canal (pronounced yeu-ta) is one of the largest civil engineering projects ever undertaken in Sweden. The 190 km (120 mi) long manmade waterway passes through several lakes and rivers to provide a route from Gothenburg (Göteborg) on the west coast i.e. in the North Sea to Lake Vänern, where the Trollhätte kanal further makes its way to the Baltic Sea thereby creating a 390 km long route across Sweden.

Interestingly enough, the 87 km of the canal out of the 190 km was manually dug by hand. The width across the canal varies between 7–14 m (23–46 ft) with a maximum depth of about 3 m (9.8 ft). The canal features 65 bridges and includes a total of 58 locks allowing passage of large vessels through certain sections. The experience of gliding through these 200-year-old locks is exceptional and the entire journey can take up to four days.

Since its inception, the canal served the country’s trade interests, and in recent years it has acquired many new statuses for sailing, boat trips, and fishing.

In the 16th century, Hans Brask, the bishop of Linköping, put forward the idea of a manmade waterway across Sweden to cut trade routes. However, this dream was not realised until the 19th century when Baltzar von Platen, a German-born former officer in the Swedish Navy, decided to construct the canal with a view that “a navigation way through the country” would benefit mining, agriculture, and other industries. Determined to complete the project, he even obtained the necessary financial and political backing.

King Charles XIII, saw this as a way of kick-starting modernisation of Sweden and issued a charter allowing the Canal Company to and operate the canal; and granted labour, land, or forests for the project.

The excavation work commenced in Motala with the help of approximately 60,000 persons, mostly soldiers, who worked for extensive hours and used primitive tools like wooden spades for excavation. Therefore, the construction process took around 22 years. Much of the expertise and equipment had to be acquired from abroad, especially from Britain. At that time, Britain was known for its canal system work all around the world. Even, Thomas Telford, a Scottish civil engineer, renowned for the design of the Caledonian Canal in Scotland, was asked to develop the initial plans for the canal.

The Göta Canal was officially opened on 26 September 1832 with a grand inauguration ceremony in presence of King Karl XIV and his family. Unfortunately, Baltzar von Platen himself did not live to see the completion of the canal, having died three years earlier.

58 locks call for a complex gate control operation. Initially, all the gates were made of wood or of cast-iron with wooden planking and were opened with the aid of large booms that were pushed forward. However, as time progressed, better technology was put to use, resulting in considerably simplified work. In 1847, gates were fitted with toothed drives and later in 1969, with electric motors. Thereafter with the introduction of hydraulics, in 1988 practically all locks were powered hydraulically. Amusingly the first lock of the canal built at Forsvik in 1813 remains in use even today.

The Göta Canal, being the biggest infrastructure project, led to the rise of the modern manufacturing industry in Sweden.

During the construction period, Baltzar von Platen established a primitive canal school, where leaders from the mining, construction, and iron manufacturing industries received a theoretical education. This later lead to the creation of the Technological Institute near Stockholm, which is today known as the Royal Institute of Technology and is one of four universities in Sweden to provide education in civil engineering.

Also widely referred to as the “cradle of the Swedish engineering industry”, a factory to produce machines required for building canal-like cranes and steam dredgers, was established in Motala. Later on, the same focused on producing equipment, locomotives, and rolling stock for the then newly constructed railways.

Furthermore, when Sweden lost Finland in 1809, Stockholm became exposed to the enemy lines feeling extremely unprotected, creating a need for a fortress in the middle of the country, where in the event of war – gold, the royal family, the government, and so on – would be safer. Since the canal allowed easy access, a fortress was built in Karlsborg. Today, in addition to the military facilities there are civilian residences, shops, a café, and a museum within the grounds of the Fortress.

Initially, the canal enabled vessels traveling to and from the Baltic Sea to avoid the Øresund thereby evading the heavy Danish toll. However, after the war ended, the toll was reduced, thus eliminating the canal’s usefulness as an alternative to the Øresund.

Although, in the 19th century, Göta Canal continued to be an important transport route for goods and passengers, railways and later on roadways, gradually took over its role.

The main reason was that the canal had to be shut during the wintertime, making it impassable for five months of the year, whereas, railways had no such weather restrictions, and could carry more passengers in a shorter time.

By the 1870s, the canal’s goods traffic had dwindled to just three major types of bulk goods – forest products, coal, and ore, none of which required rapid transportation. Traffic volumes stagnated after that and never recovered.

These days the waterway is primarily used as a tourist and recreational attraction hosting several cruise lines. Today, over 4,000 boats a year traverse the canal, providing cruises and tours for thousands of visitors. The best time of year to visit the Göta Canal is early spring to late autumn, especially if you are cycling, walking, or canoeing.