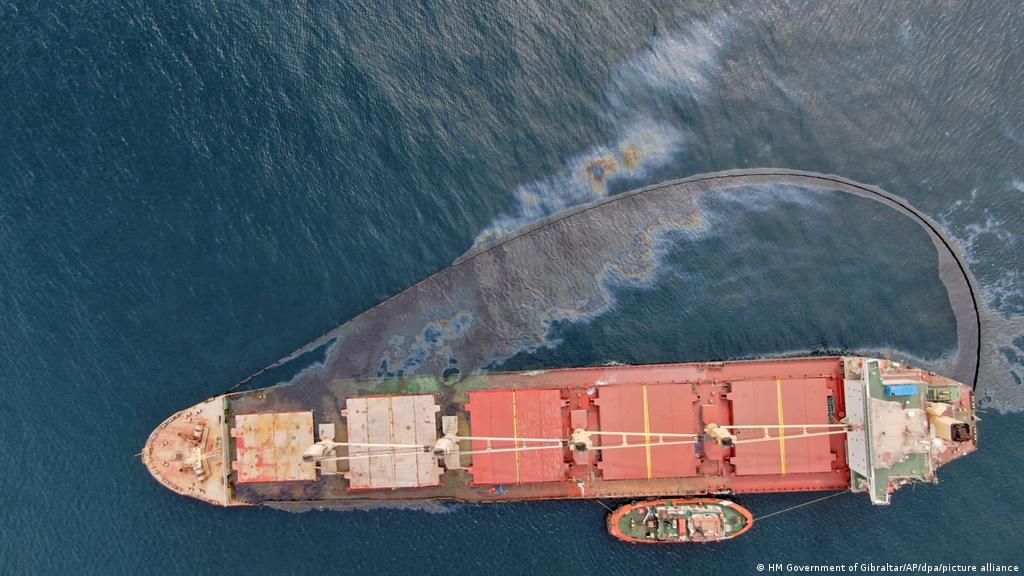 Gibraltar’s government said a stricken bulk carrier had leaked a small amount of heavy fuel oil into the sea, three days after it hit a liquefied gas tanker.

The spill’s environmental impact is not immediately clear, although divers sent to the ship have already sealed two vents in the fuel tanks that were the source of the leak.

What do we know so far?
Companies use bulk carriers to transport solid goods such as grain, and it is thought that the leaked fuel is that used by the ship itself.

The Gibraltar Port Authority (GPA) said the small amount of oil that escaped had gone beyond the perimeter of a boom that was put in place to contain any oil. Port officials in the the tiny British territory at the tip of southern Spain plan to deploy a second barrier to prevent any further expansion.

“The priority is to corral and collect the free floating oil that has escaped the boom, as well as to remove the oil that has remained contained inside the boom,” said the GPA.

Meanwhile, the authority is increasing its efforts to pump fuel oil, diesel oil and lube oil from the vessel.

Gibraltar’s Chief Minister Fabian Picardo told Spain’s TVE broadcaster on Thursday that the operation to remove some 500 metric tons of the fuel from tanks on board the ship should take about 50 hours using the ship’s own pumps.

How did the accident unfold?
The OS 35 was moving to exit the Bay of Gibraltar when the collision happened. There was no significant damage to the liquefied natural gas tanker.

As the bulk carrier began to sink, it was deliberately grounded in shallower water east of Gibraltar, some 700 meters from the beach.

Officials on Wednesday said the hull of the bulk carrier had broken.

The vessel’s 24 seafarers were taken off the ship because of the danger that the freighter could break in two. No one was injured in the incident.

The busy port has been mostly closed since the accident so officials can focus their resources on the emergency.