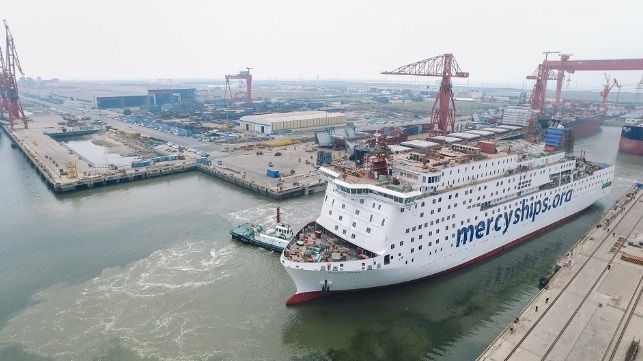 Health care NGO Mercy Ships has been building a new hospital ship at Tianjin Xingang Shipyard since 2014, and the vessel is nearing delivery. When complete, the new Global Mercy will be the world’s largest civilian-owned hospital ship.

Mercy Ships provides medical care to underserved areas of Sub-Saharan Africa. About half of the region’s population lives near the coast, according to the NGO, and hospital ships are a practical way to deliver care to people in need. The ships also provide training for local medical professionals and assist medical facilities on the ground, building permanent capacity.

The addition of Global Mercy will more than double the capacity of the organization’s current ship, Africa Mercy. Over the new vessel’s 50-year expected lifespan, the NGO estimates that it will provide surgery to more than 150,000 people. It will also have training spaces and a simulation lab where the organization’s trainers can teach local health care providers. It will also have enough berthing for 600 volunteer doctors, nurses, seafarers and other professionals who will keep the ship running.

“The Global Mercy will be a true modern marvel – a fully custom-built hospital ship with customized instruments, state-of-the-art technology and highly-trained talent of a modern hospital,” said Rosa Whitaker, president of Mercy Ships. “It also represents a unique call-to-action for anyone called to serve, and it presents the opportunity for people to use their skill set to positively impact global healthcare.”

Bill and Sue Gross, the owners of bond trader Pimco, helped underwrite the initial order with a $20 million gift. Medical technology company BD (Becton, Dickinson and Company) is donating $1 million in cash and equipment to fit out the ship, which will have six fully-equipped operating rooms.

Deltamarin provided the vessel’s design, and Stena RoRo is managing construction on behalf of Mercy Ships. The ship is fitted with four Wärtsilä 32 engines, backed by a five-year service agreement in partnership with Wärtsilä.