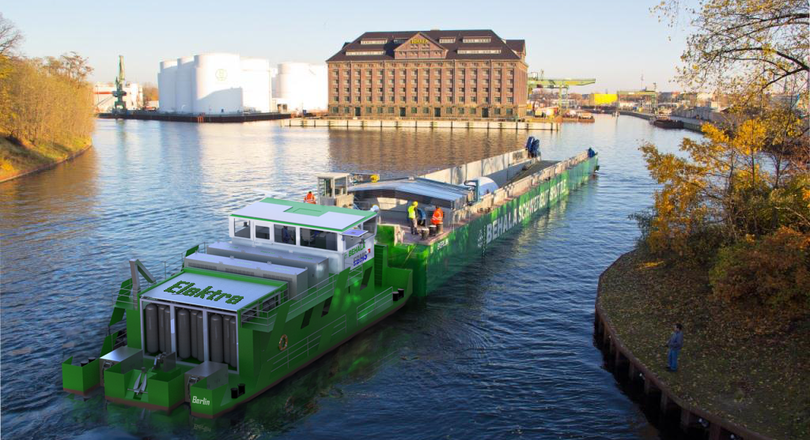 Following the two-year construction at the shipyard Hermann Barthel in Derben, the vessel is now ready for testing, the project partners informed.

Since 2016, the consortium has been working on the development of an emission-free hybrid/electrically driven experimental vehicle for use in the Berlin-Brandenburg region and for commercial operation between Berlin and Hamburg.

The project partners expect Elektra to serve as a role model as the first zero-emission vessel with the energy system designed to be transferable to a wide range of inland and coastal vessel types.

The basis of the newly developed hybrid system is the battery package, consisting of 242 DNV-GL approved GO1050 modules with a total capacity of 2.5MWh, delivered by EST-Floattech, as well as three maritime fuel cell systems, NT-PEMFC, 100kW peak power each.

Although the power of the battery and the fuel cells will be used together to power the electric motors, for complete redundancy the two powertrains are entirely independent systems, EST Floattech explained.

With 750 kg of usable gaseous hydrogen at a pressure of 500 bar on board and a battery capacity of 2,500-kilowatt hours, the ship has a range of approximately 400 kilometres in a pushed convoy with the loaded URSUS heavy-lift lighter. As described, in the trade lanes from Berlin Rhine/Ruhr, Hamburg and Szczecin, one additional shore station is needed to supply the Elektra with hydrogen and electricity.

In Berlin’s Westhafen and in the port of Lüneburg, the first shore stations for the hydrogen tanks and the charging current in the required power class of 500 kilowatts will go into operation in 2023.

Furthermore, TU Berlin has signed a supply contract with the Industrial and Commercial Park Mittelelbe / H2 Green Power & Logistics for the filling and transport of the tank systems (Multiple Energy Gas Container – MEGC) with green hydrogen until the end of the project duration at the end of 2024.

The €13 million Elektra project is funded by the German Federal Ministry of Transport and Digital Infrastructure (BMVI) with approximately €8 million and is coordinated by Project Management Jülich (PTJ) and the National Organization for Hydrogen and Fuel Cell Technology (NOW).

“We still have to pass the nautical inspection by the inspection commission and sail in different push boat configurations on the Havel in Berlin, and we look forward to the trial phases of the project”, EST Floattech said.

“In the end, we will have learned a lot and we will then also be able to say how future marketable ships in this power class will have to be optimally equipped and how the concepts for other ship types and power classes may look like”.