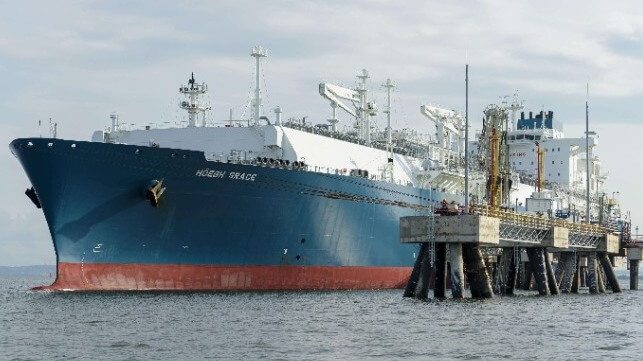 Seeking to further reduce its reliance on Russian natural gas imports, the German federal government has signed agreements with energy giants RWE and Uniper to launch the country’s first liquified natural gas import terminals. Expected to be online for the 2022-2023 winter season, the four FSRU units will provide a fifth of Germany’s needs for gas and provide the basis for the development of a long-term LNG import infrastructure.

Russia exported 142 billion cubic meters of natural gas via pipelines into Europe in 2021 with Germany being one of the largest users consuming approximately a total of 95 billion cubic meters of gas per year. Approximately half of Germany’s LNG supply was being imported from Russia but since the invasion of Ukraine, Germany has been working to develop its strategy and diversify its supply of LNG. The minister said that they have already reduced the use of Russian LNG, estimated by experts to around 35 percent, and Germany had previously said it would reduce Russian LNG to 10 percent of its supply by 2024.

The first of the two agreements announced today is with Uniper with the company reporting it will invest around €65 million ($68.5 million) to build and operate LNG terminals for the federal government. The project is in two phases, designed to get the first FSRU operational this year and then support a permanent and expanded terminal for FSRU operations and unloading and handling facilities for green gases such as ammonia.

Uniper will provide under charter two FSRU units managed by Dynagas. The plan is to connect the first of the vessels to the existing infrastructure in Wilhelmshaven, which will be adapted to attach to the vessel and in turn travel approximately 17 miles from the port to connect to the existing pipeline network and the Etzel storage facility. With a capacity of up to 7.5 billion cubic meters per year, Uniper says around 8.5 percent of Germany’s natural gas requirements are to be landed in Wilhelmshaven in the future.

“We are doing our utmost to support the German government in its plan to diversify Germany’s sources of supply for natural gas and, in the long term, also for hydrogen. With our LNG terminal, we are taking an important step – in close cooperation with the German government – towards the desired energy independence,” said Klaus-Dieter Maubach, CEO of Uniper. “In the medium and long term, we are developing Wilhelmshaven into the energy hub of the future, with a focus on hydrogen and green gases.”

By 2025, Uniper plans to expand the facilities at Wilhelmshaven to provide a permanent solution for the FSRU. In addition, they will add the capabilities for ammonia as part of the infrastructure project to develop Green Wilhelmshaven.

In the second agreement, the federal government has also reached terms with RWE to charter two additional FSRU units. The plan is for the FSRU platform to start operating as early as next winter with RWE having operational responsibility.  Both vessels are owned by Höegh LNG, which will also handle technical operations.

According to RWE, “with the two 300-meter-long FSRUs, between 10 and 14 billion cubic meters of natural gas can be made available to the German gas market annually. The framework conditions for the procurement of liquefied natural gas on the world market are the responsibility of the German government.”

The next step is to determine which unloading sites are suitable. RWE reported that Wilhelmshaven, Brunsbüttel, Rostock and Stade are under consideration. The 10-year deal for the two Höegh FSRUs managed by RWE is expected to be completed by September or October of this year.

Combined the four FSRU units once operational are expected to supply Germany with at least 20 billion cubic meters of LNG annually.