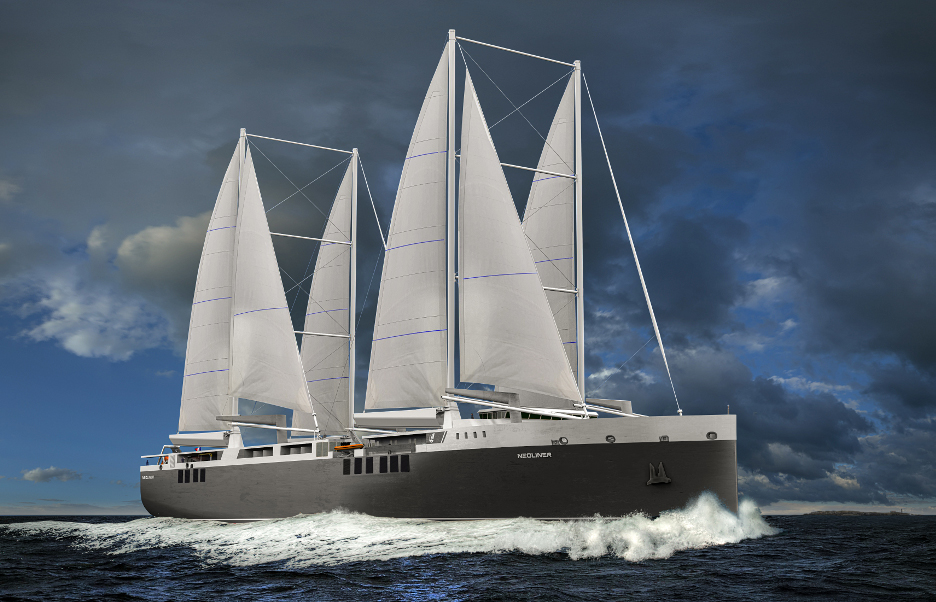 A French plan for a wind-powered merchant ship known as the Neoliner reports that it continues to make progress completed critical designs while it seeks investments and a new shipping partner to launch its operations. A number of leading manufacturers have also expressed interest in participating in the demonstration project shipping everything from handbags to tires on the unique cargo ship.

The Nantes-based company reports that it is one step closer in the long-delayed project. They launched their first construction tender in 2018 expecting to launch the first vessel before the end of 2019 and a second vessel in 2021. In 2020, after further delays, they called for a new tender reporting that 10 shipyards responded. In June 2021 they reported that they had again selected the Loire-based Neopolia Mobility network to build its prototype vessel. The Sogesstran group joined the project as the reference investor while shippers, including the Renault Group, Manitou Group, Groupe Beneteau, Jas Hennessy & Co, the Michelin Group, and Clarins, were all reported to be interested in using the vessel to transport goods.

Neoline reports that in the interim it has carried out additional technical studies with Chantiers de l’Atlantique, Neopolia, Mauric, and D-Ice, determining that the ship’s rigging will consist of two “Solid Sail” folding rigging systems, It will include two masts approximately 250 feet in height, each equipped with the “Solid Sail” sail technology of 1,100 m2 and a flexible jib of 400 m2, with a total sail area of 3,000 m2.

The studies reported confirmed that the “Solid Sail” rig, with its rigid sails, will provide the equivalent or even better performance than the 4,200 m2 of flexible sails they initially planned for the duplex rig. The improved performance is attributed to the thinness and vertical elongation of the structure, as well as the reduction of the masking effect of the sails. Further, they reported the expected lifetime of the sail is 25 years, which will reduce maintenance costs compared to soft sails.

“The expertise of our technical partners and local players, combined with Chantiers de l’Atlantique’s Research and Development, give the project a synergy of skills, which made this choice possible. The continuous work on the general design of the ship over the last few months by Mauric, Neoliner’s architect, has enabled the architecture to be adapted to this new rig, in order to ensure its integration on board. The studies have confirmed the technical feasibility of the major evolution of the rig, both from a structural and stability point of view and in terms of the general organization of the ship” explains Jean Zanuttini, President of NEOLINE.

They, however, have further delayed the start of construction to the fall of 2022, but still expect to enter service in 2024 or 2025. The Sogestran group has decided to withdraw from NEOLINE’s shareholding but provided transitional financial support for the integration of a new reference partner. Neoline has approached another shipowner with whom discussions are in progress.

“The project is adapting to a rapidly changing world and, although the financial and industrial closing is taking longer than initially planned, its relevance is being strengthened and we are still aiming for commissioning by 2024/2025” explains Zanuttini.

The concept was to develop the two vessels to demonstrate the concept and build further support to build larger vessels. The transatlantic pilot line the company says will connect Saint-Nazaire, France with Saint-Pierre et- Miquelon and Halifax in Canada, and Baltimore, Maryland. The vessel will primarily use sail power although be also fitted with a diesel-electric motor. They plan for a departure every 15 days.

The updated Main Characteristics Neoliner are now reported to be: