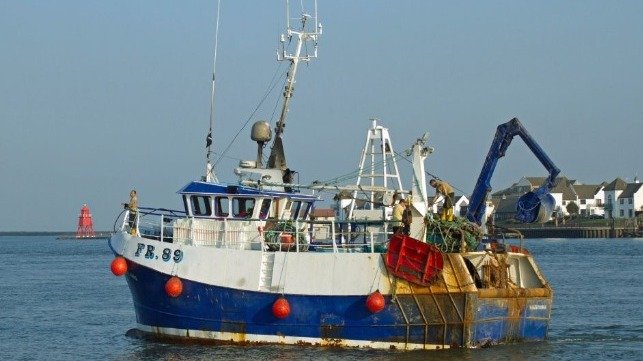 France and the UK are headed into a deepening trade dispute over fishing rights in the English Channel, with French officials threatening to ban UK fishing vessels and their catch from ports in France.

French officials claim that the UK has failed to honor the terms of its post-Brexit agreement regarding licenses and access for European vessels. After Brexit, the crown dependency of Jersey – a British island in the English Channel – used its new authority to place restrictions on foreign-flag fishing permits for its local waters. It imposed a requirement that foreign (French) fishermen must show a history of prior operations in the area and must upgrade to the latest trawling technology.

The move drew condemnation from French fishermen and the French government, which declared Jersey’s new rules “null and void.”  Dozens of French shellfish trawlers mobilized to Jersey’s main harbor, where they occupied the entrance in an act of protest. The Royal Navy deployed the patrol ship HMS Severn to help keep the peace.

The dispute has not been resolved, and the French government has been escalating its response. In mid-May, France helped to hold up a UK-EU post-Brexit accord on financial services, citing the question of fishing rights. France’s minister of maritime affairs even raised the possibility of cutting off Jersey’s power supply (the island receives its electricity from France via subsea cable).

Last week, the French government said that it would begin blocking British fishing boats from certain French ports on November 2 unless the UK reached a deal on fishing rights. A spokesperson promised “systematic customs and sanitary checks on products brought to France and a ban on landing seafood” for UK-caught fish. France’s Europe minister, Clement Beaune, warned that a stringent approach to customs enforcement could also be extended to “other merchandise” from the UK.

The ramped-up targeting of UK fishing vessels may have already begun. On Thursday, French fisheries enforcement seized the British scallop dredger Cornelis Gert Jan off Le Havre for fishing without a license, and another vessel received a fine.

“France’s threats are disappointing and disproportionate, and not what we would expect from a close ally and partner,” said UK Brexit minister David Frost in a response. “The measures being threatened do not appear to be compatible with the [post-Brexit] Trade and Cooperation Agreement and wider international law.”

Frost also reiterated the UK’s support for Jersey and neighboring Guernsey in their decision to impose local licensing requirements.