First Test Of Biofuel In Singapore Conducted By BHP And Oldendorff 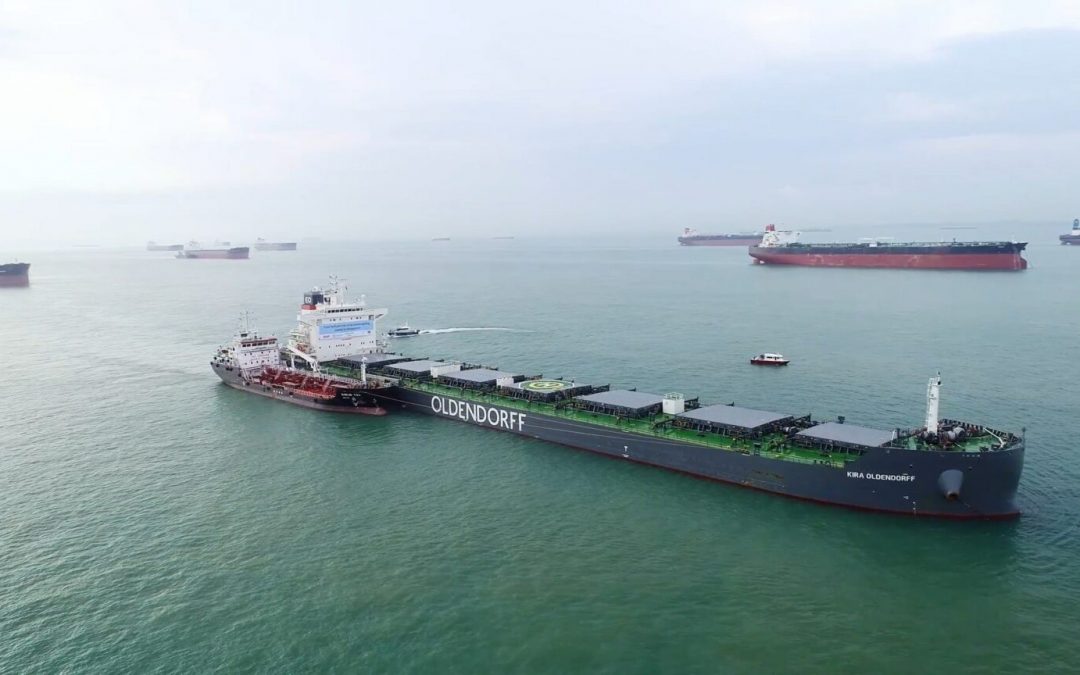 The first marine trial using biofuel aboard an ocean-going bulk vessel was completed earlier this month in Singapore. The trial was the latest in a series of successful programs in which major shipping companies used either a biofuel blend or total biofuel derived from elements such as used cooking oil, sustainable waste, and residue streams as feedstock.

This trial involved a partnership between Australian energy giant BHP and German shipping company Oldendorff Carriers working with GoodFuels that supplied the biofuel and the support of the Maritime and Port Authority of Singapore.

The vessel selected for the biofuel trial was one of the Oldendorff’s eco-Kamsarmaxes, the Kira Oldendorff. The 2020-built 81,290 dwt dry bulk carrier was bunkered with a drop-in of advanced biofuel to be blended with conventional fossil fuels. Minor modifications were carried out to burn the biofuel blend efficiently, and monitoring instruments were installed to capture the trial data as accurately as possible.

According to the companies involved in the trial, the objectives of the biofuel bunkering included understanding the behavior of the fuel and the impact on emissions, and assessing engine and vessel operational performance, as well as exploring the technical and commercial merits and challenges of biofuels as a marine fuel. The advanced biofuel used the companies said was capable of reducing CO2 emissions by 80 to 90 percent well-to-exhaust compared with HFO/VLSFO.

The trial was designed to enable the companies to develop an informed strategy on the structural supply and use of biofuels. BHP said that it was assessing biofuels as a potential low-carbon fuel of the future, and as a tool to meet its goal for reducing greenhouse gas emission. Oldendorff has been exploring a range of strategies as part of its programs to reduce emissions. Earlier this year, the line announced that they would participate in a joint development project to design and test wind-assisted propulsion technology for its dry bulk carriers.

Expansion of biofuel into Singapore represents a key step for the emerging alternative. Singapore is the world’s largest bunker market with the MPA reporting sales of more than 4.5 million metric tons per month at the beginning of 2021 used to fuel the more than 3,500 vessels calling in Singapore to bunker. Last year over 49 million metric tons of fuel were sold nearing the port’s record of over 50.6 million metric tons in 2017. If the pace of bunker sales in the first two months of 2021 continues for the year, Singapore could exceed its previous record by nearly 10 percent.

Earlier this year, both ONE and Eastern Pacific Shipping also completed successful trials of biofuels on their in-service ships. Eastern Pacific detailed the results of its initiative in a presentation to the IMO.