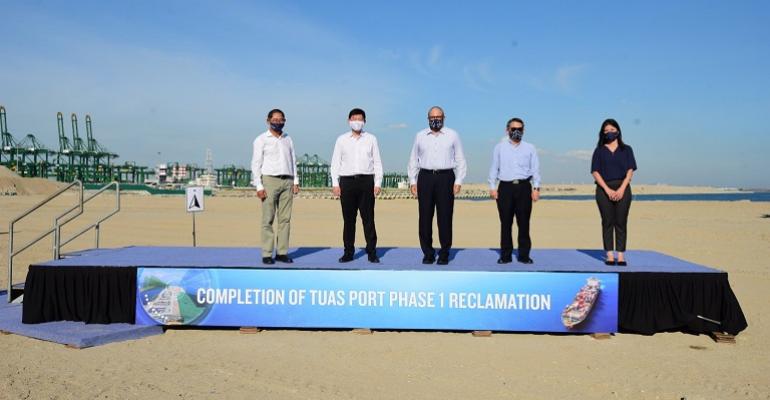 Singapore has completed reclamation works for the first phase it’s new mega-container port – Tuas Port with the first two berths set to be in operation by year end.

Reclamation works started on the port in 2015, which when fully completed in 2040 will be the world’s largest fully automated terminal capable of handling 65m teu annually. Tuas Port, located in the western tip of Singapore will gradually replace existing terminals closer to the city centre. The country’s first container terminal Tanjong Pagar Terminal has already ceased operations.

An event held today at the terminal marked both the completion of reclamation works for phase I and also the 25th anniversary of the Maritime & Port Authority of Singapore (MPA).

Speaking at the event, S Iswaran, Minister for Transport and Minister-in-charge of Trade Relations said, “The completion of Phase 1 reclamation for Tuas Port is a significant milestone, demonstrating our resilience amidst adversity, and affirming Singapore’s status as a reliable global hub port trusted by partners.”

The works on phase I included the reclamation of 294 hectares of land using innovative 10-storey tall concrete cassions.

The first phase of the terminal will have 21 berths capable of handling 20m teu a year, and the authorities said terminal operator PSA was on target to “operationalise” the first two berths by the end of the year.

Reclamation works for phase II are currently underway, while the third phase of reclamation for the port is under planning.