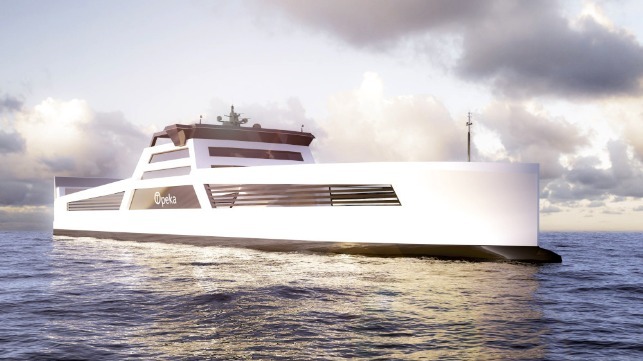 An increasing number of projects are seeking to develop hydrogen-based power technologies that can be commercially viable for the shipping industry. Among the projects that are advancing is one in Finland studying the production of green hydrogen for use in the ferries, while a public-private partnership was recently formed in Japan to study and develop hydrogen fuel cells for the commercial shipping industry.

One of the fields of study is green hydrogen. In Europe, they are looking at coupling with the offshore wind power generation sector to produce hydrogen from renewable energy. Driven by wind energy, the concept is that the electrolysis process that splits water into the elements of hydrogen and oxygen would create renewable energy.

With 90 inhabited islands and a population of 30,000, the region relies on its ferries. A research study found in 2015 that maritime transport accounted for about 70 percent of Aland’s emissions. The study estimated that the emissions amounted to 753 thousand tons of carbon dioxide equivalents each year.

The feasibility study, which is expected to be completed in November, provides the first estimate for the technical and economic feasibility of the concept covering hydrogen production at a wind farm and using the hydrogen in fuel cells to power ferries in the Åland archipelago. For the next phase of the project, Flexens working with the Government of Aland has submitted a grant application to the EU Innovation Fund to advance the project towards investments. They are currently projecting that the project could be realized with the first applications of the technologies possible in 2024.

The following year, 2025, a Japanese partnership hopes to operate its first hydrogen fuel cell vessel. The plan calls for an approximately 100-foot long ferry able to carry 100 people at speeds of over 12 mph. Kansai Electric Power, Iwatani, Namura Shipbuilding, the Development Bank of Japan, and the Tokyo University of Marine Science and Technology are collaborating on the feasibility study for the vessel powered by hydrogen fuel cells. The project will also incorporate the development of the fueling to supply hydrogen to the vessel.
Source: Maritime Executive