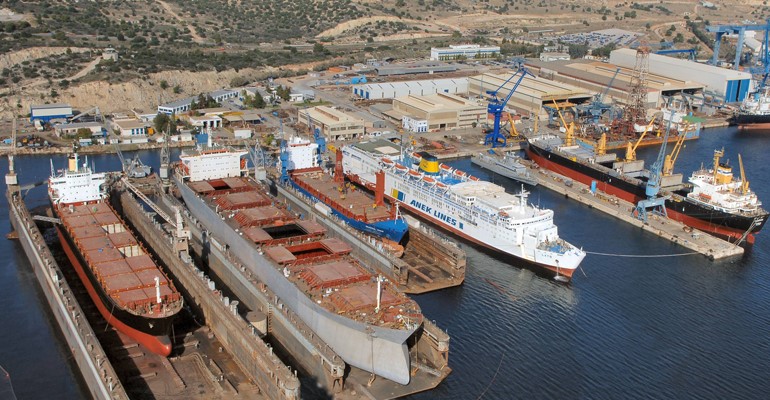 Italy’s Fincantieri group has officially expressed interest in the restructuring of Greece’s Elefsis Shipyards in cooperation with US-backed Onex Group, controller of ailing Elefsis and the successful Syros-based Neorion Shipyard.

The expression of interest in the yard west of Piraeus was made during a meeting between Development and Investments minister Adonis Georgiadis, Defense minister Nikos Panagiotopoulos and Development and Investments Alternate minister Nikos Papathanasis with the chairman and ceo of Onex, Panos Xenokostas and the vice-president and MD of shipyards in Fincantieri Group, Giuseppe Giordo, on October 21.

In comments made after the meeting, minister Georgiadis said that a “big step towards the restructuring of Elefsis Shipyards was made today as one of the largest shipyard groups globally, Fincantieri Group, officially expressed interest in participating in the effort, in co-operation with Greek-led but US-based Onex. The Greek government welcomes this proposal. Greece needs the Elefsis Shipyards also to have a strong shipbuilding industry.”

Fincantieri’s Giordo said: “It is an important step in Greek-Italian business co-operation. Our goal is to contribute in creating in Greece one of the best shipbuilding industries worldwide.”

Elefsis is the third Greek shipbuilding and shiprepair facility that has attracted investor interest in a planned debt restructuring and turnaround, Hellenic Shipyards, Skaramanda and Neorion Shipyards located on the island of Syros.

Fincantieri’s interest in Elefsis is understood to focus on potential warship contracts, and according to a Greek government statement, Fincantieri wants to team up with Onex, a Greek-led but New York-based company that has already been seen as a white knight for Elefsis after largely turning around Neorion, from a loss-making shiprepair facility on the Greek island of Syros.

The Greek government offers its full backing to the Fincantieri-Onex venture, which is expected to soon submit a financial rescue plan to Greek courts. Under the scheme, creditors including the state, lenders and suppliers are to forebear part of the company’s debt, which is thought to exceed Euro 300m ($349m). An attempt to find an investor for the yard in 2019 failed.

The yard has three conventional floating docks, the biggest of which can handle construction, repair and modification of vessels, of up to 120,000dwt.