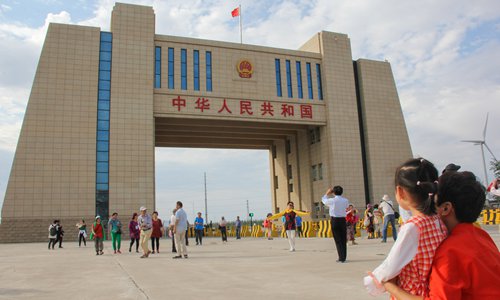 Ports and airports are urged to be highly vigilant in anti-epidemic work as they were identified as the sources of the latest spikes in China, after a port area in Alashankou, Northwest China’s Xinjiang Uygur Autonomous Region, reported three asymptomatic COVID-19 cases on Sunday, following infections related to imported goods or personnel found in the East China cities of Nanjing and Ningbo.

Chinese Vice Premier Sun Chunlan stressed on Sunday that border areas, port cities, airports and international flights must be strictly managed under closed loops. COVID-19 screening tests and health monitoring must be carried out to plug any potential loopholes that may cause the virus spread.

Sun made the comments during her inspection of epidemic control work in Yangzhou, East China’s Jiangsu Province.

The patients detected on Sunday in Xinjiang have been transferred to a designated hospital for quarantine, and local emergency epidemic response work has been launched, state broadcaster China Central Television (CCTV) reported on Sunday. They were identified in routine nucleic testing that is held every three days. Some 74 close contacts have been discovered, all of whom are under isolated clinical observation.

The previous COVID-19 spike in Xinjiang, which broke out in Kashi last winter, was caused by coronavirus-contaminated containers imported from Tajikistan.

As contaminated cargo, especially cold-chain products, coming into China via ports and other channels caused severe COVID-19 flare-ups last year, ports and airports are again in the spotlight after they have been found to be the sources of the latest epidemic spike in multiple places across China.

While multiple places are reporting COVID-19 cases related to imported goods and people, health experts believe there won’t be large-scale infections like last year, since a mature and comprehensive regional response mechanism has been established nationwide.

However, Wuhan-based virologist Yang Zhanqiu urged the public to remain vigilant. The Delta variant has grown resistant to high temperatures and can spread easily in the summer, compared with the original virus, which could only survive a long period of time in cold temperatures, he told the Global Times on Sunday.

“Variants can adapt to different environments across the world and take on diverse characteristics, and the Delta variant – which is fueling China’s COVID-19 surge – has grown resistant to heat, which means that epidemic prevention work should always be guaranteed to guard the frontline, even in hot weather,” Yang said.

East China’s Ningbo-Zhoushan port, the world’s busiest cargo port with the largest annual throughput, fell victim to imported COVID-19 infections when a worker from a container shipping company tested positive on Wednesday. The person is believed to have contracted the virus through contact with foreign cargo or personnel.

The very first infections in the latest COVID-19 surge across the country also started from an international airport in Nanjing, East China’s Jiangsu Province. A flight from Russia landed at the airport on July 10, passing the coronavirus onto a cleaning staffer in the flight cabin, whose improper handling of garbage resulted in large-scale human transmission.