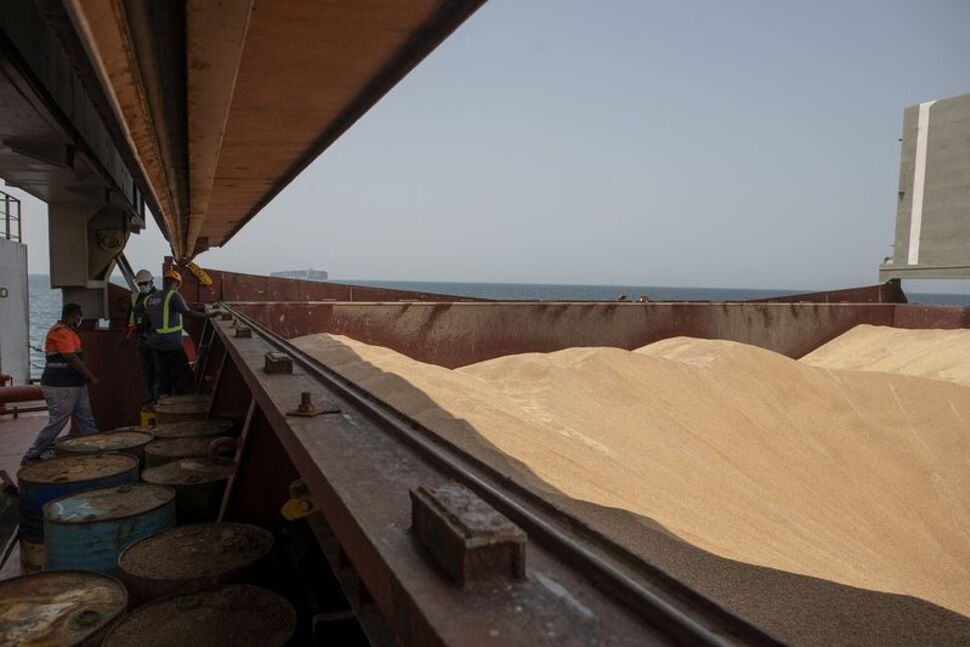 Too few ships are arriving in Ukraine to quickly clear mountains of grain built up over months of war despite a U.N.-backed sea corridor, threatening to drive up global food prices and leave the country’s cash-strapped farmers struggling to plant crops.

President Vladimir Putin on Wednesday triggered fears that Russia could withdraw support for the sea corridor after he accused Kyiv of using it to export to the European Union and Turkey rather than poor nations that most need the food, particularly in Africa.

Even if the agreement holds, the dangers of sending ships into the heavily mined Black Sea, along with a lack of large vessels and the exclusion of a major port, means volumes transported are well below Ukraine’s goal of doubling farm exports to at least 6 million tonnes by October.

“For the moment, we do not send our ships to Ukrainian ports because we don’t believe it is safe,” Alexander Saverys, chief executive of Belgian headquartered shipping group CMB, which shipped from Ukraine prior to the war, told Reuters.

“The situation on the ground is still very volatile and there is a clear danger to our seafarers’ lives. There is also a real risk of being stuck in port.”

The sea corridor was facilitated by the United Nations and Turkey in July. According to the latest data from the Joint Coordination Centre (JCC) in Istanbul, which oversees the deal, some 2 million tonnes of grain – mainly corn – has been exported since the first ship sailed on Aug 1.

At the current rate of exports, it would take around six months to ship the rest of the grain left over from last year’s harvest through the three ports included in the pact – Odesa, Chornomorsk and Pivdennyi – with the help of rail exports, according to Reuters’ calculations.

By then, another mountain of grain will have built up from the current harvest, including 20 million tonnes of wheat and Ukraine’s corn crop which is expected to total around 30 million tonnes.

Unable to sell, farmers do not have the money to invest in their fields, meaning winter wheat planting is on track to be about a third below last year, said Denys Marchuk, deputy chair of the Ukrainian Agrarian Council.

That could extend a global food crisis which the U.N. initiative had sought to mitigate. Food prices – which spiked after Russia’s Feb. 24 invasion – eased following the agreement, but Ukraine’s wheat has still not been reaching its traditional clients in Africa at anywhere near normal volumes.

Somalia, which has directly received just one 28,500 tonne cargo of wheat under the agreement according to U.N. data, is entering a famine caused by years of drought made worse by the surge in global food prices, the United Nations said on Monday.

Dmitry Skornyakov, chief executive of Ukraine farm company HarvEast, said the sea corridor was “not game changing” in part because prices being paid for grain in Ukraine were not high enough to make massive exports immediately viable.

As a result, he said, his company was cutting its planted wheat area and drilling no barley or rye this year.

“We will definitely see less wheat and if we wait until spring and the situation remains as it is we will see a dramatic decrease in corn,” he said.

Ports in Ukraine, a top 5 global grain exporter before the war, used to ship about 5-6 million tonnes of grain per month, according to analysis from logistics platform project44.

Many of the vessels departing Ukraine are much smaller.

Data from maritime and commodities data platform Shipfix, shows an average cargo size of around 20,000 tonnes.

Alex Stuart-Grumbar, of Shipfix, said successful journeys made under the agreement so far could provide momentum for shipments to accelerate. However, at current cargo sizes, approximately a thousand voyages would be required clear the backlog, he said.

Larger ships carrying over 60,000 tonnes of grains, known as panamaxes, which would have traded Black Sea routes, have been redeployed to other regions including North and South America. It would take weeks to reposition them as grain export seasons there are underway, shipping industry sources say, with a big crop in Brazil tying up many vessels.

“We are, at the moment, unable as yet to position any of our assets in the Black Sea and therefore are unable to look at this business,” Khalid Hashim, managing director of leading Thai listed dry bulk shipping company Precious Shipping, told Reuters.

The grains initiative excludes Mykolaiv, the country’s second-largest grain terminal according to 2021 shipments data, hampering its ability to restore exports to pre-invasion levels.

Grain silos in Mykolaiv were hit by Russian shelling of the city on Aug. 31, underscoring the dangers.

Some marine insurers have provided coverage to enable grains to set sail from Ukraine’s ports, but shipping companies are still very concerned.

“It is one thing to be insured against a calamity, it is another to put our crew and our ship potentially in harm’s way,” said CMB’s Saverys, whose group has a dry bulk division.

U.S. listed Genco, another leading dry bulk shipping company, said it was looking at how to go about working in Ukraine.

“There are challenges with insurance, most importantly keeping our crew safe and there are a lot of other logistics issues in terms of the convoys and load times,” Genco’s chief executive and president John Wobensmith told Reuters.

“We are not quite there yet,” he said.

Even when last year’s crop has been shipped, it will take a number of weeks to clean port silos in preparation for the arrival of this year’s harvest, an important step to limit the threat posed by pests.

Viktor Vyshnov, deputy head of Ukraine’s Shipping Administration, said more use of the corridor was needed to bring down insurance costs but acknowledged that the war was constraining shipowners.

“Some of them are still afraid for their ships,” he said.

The bottlenecks have raised the cost of even getting harvest to the ports and storage silos, an issue farming minister Solsky acknowledged was hindering exports.

“Our main and biggest problem…is that our demand for logistics is several times higher than the supply,” he said.