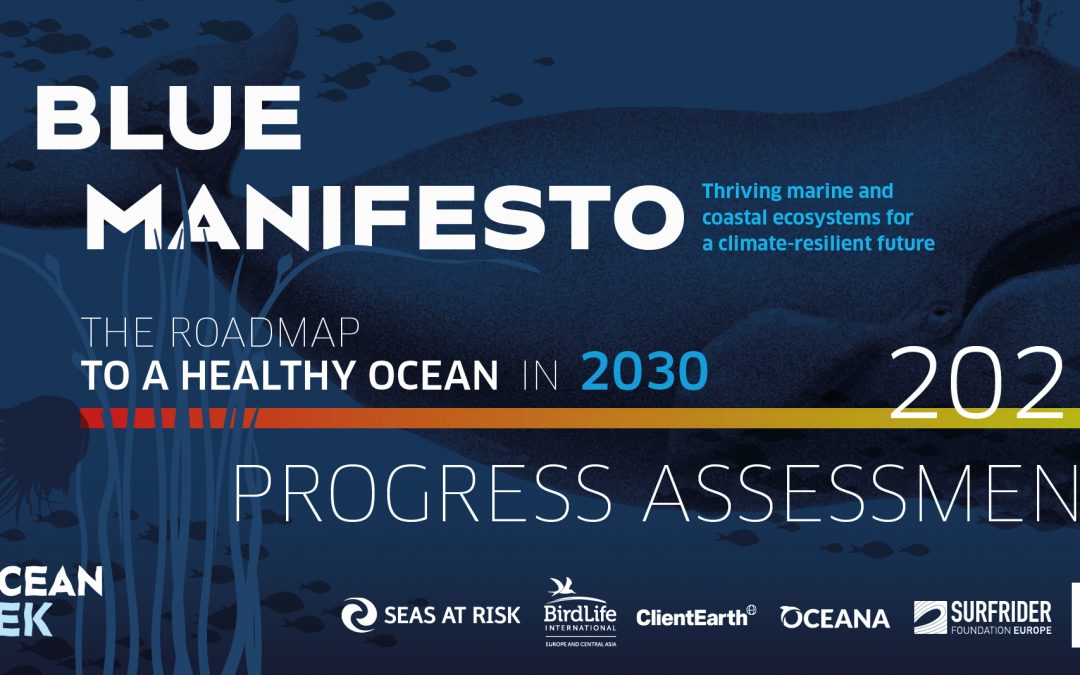 Yesterday at an EU Ocean Week event, six NGOs published their assessment of the EU’s progress to secure a healthy ocean by 2030 – the goal set by the Blue Manifesto(1). The analysis reveals that the EU made little progress in the last year to achieve the necessary targets outlined in the Blue Manifesto(2).

Out of eight policy milestones due for achievement by the end of 2021, only one was fully met;

three milestones were not met, two were only partly delivered and two others had insufficient progress to establish a score. Worse, three 2020 milestones were downgraded in light of further policy developments in 2021, making the revised overall outcome for 2020 more negative than initially reported(3). Scarce political ambition and delays in the policy process – partly due to the Covid-19 pandemic – were found to be the key reasons for poor progress.
Examples:

The legislation adopted by the EU to prevent plastic pollution set out an encouraging path to transition away from single-use plastics. But the milestone has not been fully met. In fact, Member States only did the bare minimum during the transposition into national legislation, deflating the ambition of the original policy. Moreover, the overall process was also delayed.

While the Council of the EU is seeking to significantly weaken the ambition of the EU Fisheries Control regulation, the EU has also failed to ensure full compliance of the fishing sector with fisheries and nature laws.

“Despite the poor performance scored for two years in a row towards the goal of making the ocean healthy by 2030, the EU can still make up for lost time by stepping up in the eight coming years. The EU faces a challenge where failure is not an option. The ocean supports all life on Earth. And there is no Ocean B,” said Adam Weiss, Head of ClientEarth Ocean programme. He added: “We call on the European Commission to seize the opportunity to restore and protect our seas and ocean, by keeping ambition high in the upcoming Nature Restoration Law. ”

In light of the findings and in anticipation of the upcoming EU Nature Restoration Law, due to be published on June 22, the NGOs behind the analysis – Birdlife Europe & Central Asia, ClientEarth, Oceana, Seas at Risk, Surfrider Foundation Europe and WWF – call on EU decision makers to commit to restore and protect the ocean.

Speaking at the event, Grace O’Sullivan, Member of the European Parliament (Greens), said: “We are running out of time to turn the tide on ocean degradation. 2022 could be a pivotal moment for ocean conservation and restoration. We need to be ambitious and bring the ocean to the core of the political agenda, following through on the promises of the European Green Deal, while also being effective in implementing the legislation that already exists. Member States must be held to account over their failure to act on the climate and biodiversity crises, before it is too late.”

Alexandra Cousteau, senior advisor, Oceana and co-founder, Oceans 2050 said: “Despite a six-fold increase in the Natura 2000 surface at sea in the last 20 years, most threatened marine habitats and species in the EU remain in poor conservation status. This, along with the climate crisis, require urgent action. The European Commission proposal later this month that will put forward legally-binding targets to restore biodiversity and degraded ecosystems must be ambitious enough to offer the much-needed nature-based solutions to both help reverse this biodiversity loss and contribute to mitigating climate change.”

Barbara Rodenburg-Geertsema, small-scale fisher, Goede vissers said: Good policy making starts with respect for our seas as part of the planet that bares us and nourishes us together with all other living beings. Our waters are a common source of life, beauty, food and wealth. The sea is imponderable, unpossessable, and can’t be taken away from the local communities who live with the sea.

“My generation and the generations to come are in the front line facing the consequences if we don’t act to protect the ocean and our climate. As highlighted in the recommendation of the EurOcean’s youth and echoed in the Blue Manifesto, we need urgent action from the EU to tackle pollution” explains Jessica Antonisse, Youth Ambassador of the Eurocean’s youth network, initiated in 2021 by Surfrider Foundation Europe.