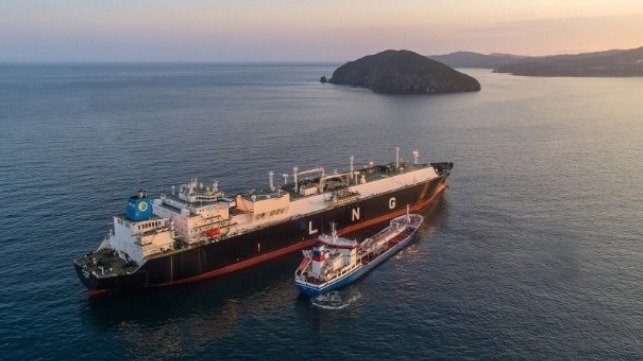 While the debate continues about the environmental performance of liquified natural gas as a marine fuel and its longer-term prospects, commissioners from the European Union publicly stated that they recognize the importance of LNG in helping the shipping industry achieve Europe’s goals for decarbonization. The acknowledgment came as other lawmakers in the European Parliament have been pushing for the removal of fossil gasses from the sanctioned sources of energy.

Speaking at a private conference on green innovations, Joaquim Nunes de Almeida, director for energy-intensive industries and mobility with the European Commission’s DG GROW, recognized that LNG is a necessary energy source as the maritime industry seeks to transition from traditional fuels to new low or zero-carbon sources of energy. The commissioner told listeners that supply issues and the need to develop further technologies make an immediate switch away from traditional fuel sources unrealistic.

“We have to be aware of the constraints in which the industry is operating right now,” said de Almeida. “Right now the truth of the matter is that you still have very little renewables and hydrogen or decarbonized forms of energy available in Europe.” The lack of supply of advanced biofuels and new energy sources remains a hurdle to requiring the use of the resources available today.

He went on to say that, “We’re on a difficult journey here, so we need to have some understanding for the industry that is on the one hand faced with an increased carbon price and on the other hand with a lack of real alternatives for the moment,” reports conference organizer EURACTIV.

Other European lawmakers and environmentalists, however, have been seeking to exclude LNG from the FuelEU maritime legislation based on fears that it would slow the adoption of developing energy sources such as batteries, hydrogen, and ammonia, which they believe hold the potential to reach carbon neutrality in the maritime industry.

The EU’s discussion on the future of LNG comes as other segments have also weighed in on the marine gas fuel which is currently being adopted by many ship operators as a near-term strategy to address the push toward decarbonization. The oil producers’ association OPEC in its newly issued World Oil Outlook to 2045 anticipates that within the decade demand for conventional marine fuel will plateau. The report speculates that “It is projected that LNG usage will expand in marine modern ICEs (internal combustion engines) in the medium- to long-term. In fact, LNG could become the dominant fuel, especially for large ocean-going vessels.”

The oil producers in their report, however, also recognize the environmental debate around LNG and critics who say the methane slip from the current LNG applications far outweighs the benefits in carbon reduction. OPEC writes in its report, “Finally, the future of LNG in marine bunkers remains uncertain for the time being, as some have voiced doubt about its long-term sustainability in view of CO2 emission reduction targets and have called for the increasing use of renewable hydrogen or ammonia instead. Consequently, some orders of LNG-fueled vessels have been canceled amid these concerns.”

No evidence was supplied to confirm order cancelations or specific instances of shipowners turning away from LNG. However, earlier this year, the World Bank issued a highly critical report of LNG. The international financial organization dismissed the long-term role of LNG citing the environmental concerns instead supporting emerging technologies for ammonia and hydrogen as the most promising future fuels. They encouraged emerging economies not to invest in LNG and instead focus on what they believed were the more promising long-term energy sources.

Industry groups, including SEA-LNG, were quick to respond to the World Bank saying the organization was misinformed and wrong to advise against LNG. They cited advancements in the technologies and like the EU director highlighted the critical near-term role LNG was playing in transitioning the maritime industry from conventional fuels.