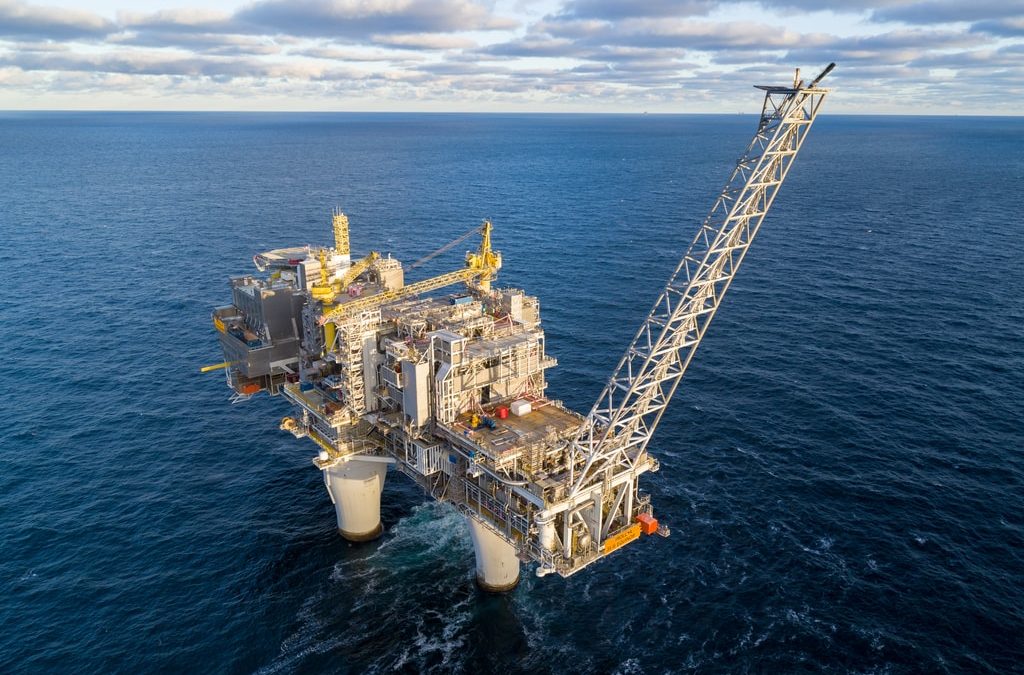 Norwegian oil and gas giant Equinor and its partners in the Troll and Oseberg offshore fields are looking into options for building a floating offshore wind farm, which could deliver power to an area with a strained power balance, ensuring a stable long-term power price and reduced business interruption risks for these fields.

Troll and Oseberg fields are operated by Equinor and located in the North Sea off Norway. Equinor’s partners in these offshore fields are Petoro, TotalEnergies, Shell, and ConocoPhillips.

As revealed by Equinor on Friday, this floating offshore wind farm project, named Trollvind, would have an installed capacity of about ~1 GW and an annual production of ~4.3 TWh with a startup in 2027. The wind farm would be located in the Troll area, some 65 kilometres west of Kollsnes in Vestland County. It could provide much of the electricity needed to run the Troll and Oseberg offshore fields through an onshore connection point.

The Bergen area already serves several of these installations with power – and needs more input to its electricity grid. The plan is that the partnership will buy as much energy as the wind farm can produce at a price that can make the project possible, the Norwegian giant explained.

Equinor stated three main objectives of this project envisioned by the partnerships. Namely, power from Trollvind could make a solid contribution towards electrification of oil and gas installations, it could accelerate offshore wind development in Norway, and deliver extra power to the Bergen region.

Equinor’s chief executive, Anders Opedal, stated: “Trollvind is a concept where renewable energy works to facilitate several objectives; helping cut emissions through electrification, delivering power to an area where shortages have already created challenges for new industrial development, and Norway maintains its position as a leader in the industrialisation of floating offshore wind.”

Equinor believes that the electrification of installations will be a key initiative if Norway is to succeed in reducing emissions by 50 per cent by 2030.

Phil Cunningham, TotalEnergies Managing Director and Country Chair, stated: “We are excited about the possibilities to supply our energy production offshore with new renewable power.”

Another upside of this project is that the collaboration established between government authorities and the industry through Equinor’s Hywind Tampenfloating wind farm project could be built on for the Trollvind project and the experience and learnings from that project could be transferred and utilised.

According to Equinor, transferring offshore wind power to shore may enable the possibility to build a larger wind farm than one directly connected to oil and gas installations offshore. Increasing the size of wind farms is a key factor in industrialising floating offshore wind and reducing costs.

Bringing the power to shore also promotes more efficient power utilisation through better interaction with regulated hydropower and onshore industry. Equinor also noted that increased access to power in this area also means improved security of supply for the oil and gas installations.

With all of this in mind, the partners are evaluating commercial arrangements where the Trollvind development is selling power to the Troll and Oseberg installations and the Kollsnes plant. As a result, Trollvind will not require other forms of financial support.

Estimates indicate that Trollvind can deliver power for less than NOK 1/kWh. Such an agreement would ensure greater long-term access to power at a stable price in an area where the power situation is strained and, at the same time, secure a sufficient income level for the wind farm to trigger the investment.

Trollvind is now being further matured by the Troll and Oseberg partners initiating feasibility studies aimed at an investment decision during 2023.

The project was welcomed by Norway’s Industri Energi union. Frode Alfheim, union leader, said it could be a historic effort for Norwegian industrial jobs, emphasising that it is an investment the industry makes entirely on its own and at its own expense.