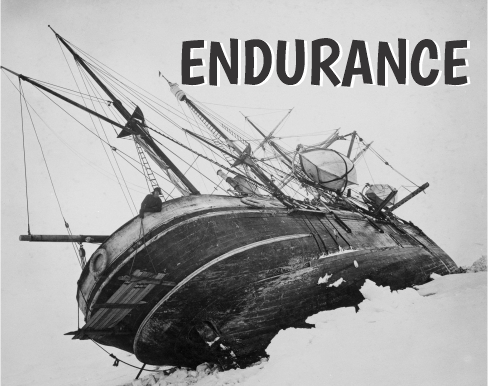 Endurance was originally known as Polaris and was built for an Belgian polar explorer Adrien de Gerlache and the Norwegian Ship Owner Lars Christensen. The ship was orginally built for arctic polar cruises for tourists to hunt polar bear. Later due to the financial issues, Gerlache left their partnership which stopped Christensen from paying the Framnaes shipyard the remaining amount to hand over and equip the ship. Christensen tried for almost a year to sell the ship since the whaling and sealing industries were unable to use her due to her distinctive design as an ice-capable passenger ship with little room for stores and no cargo hold. Meanwhile, she was too big, slow and uncomfortable to be a private steam yacht. In the event, Christensen was happy to sell the ship to Ernest Shackleton in January 1914, which represented a significant loss to Christensen as it barely covered the outstanding payments to Framnæs. Shackleton did not have the money at the time, but Christensen was eager for him to purchase the ship and paid the deposit himself. The ship was originally projected to be ready by mid-May, but completion was delayed for a month.

Shackleton had the ship relocated from Norway to London. She arrived at the Millwall Dock in the spring of 1914, and until the end of July was spent gathering equipment, stores, finances, and crew. The ‘tween deck was converted into a cargo hold, and the crew instead made their quarters in the forecastle.The refit saw the ship repainted from white and gilt to black. Despite her change of name, she retained a large badge in the shape of a five-pointed star on her stern, which originally symbolised her name after the pole star.

During the 1914-1917 Imperial Trans-Antarctic Expedition, Ernest Shackleton and a crew of 27 men sailed aboard the Endurance with one cat, Mrs Chippy, for the Antarctic. The ship was bought by Shackleton in January 1914 for the expedition, which would be her first voyage.

On November 21, 1915, Endurance finally broke up and sank into the Weddell Sea. After spending two months camping on ice and five days at sea in lifeboats, they eventually reached land, disembarking at Elephant Island, more than 500 km from where their ship sank.

All of the crew survived and were eventually rescued in 1916 after using the ship’s boats to travel to Elephant Island and Shackleton, the ship’s captain, Frank Worsley, and four others made a voyage to seek help.
With sea conditions getting worse, the ship could not complete its voyage and had to be converted into a winter station. Despite hopes that it would be released from ice and could sail again, by the end of October 1915, it became obvious that Endurance was gradually losing the battle with the sea. The crew transferred the supplies and equipment onto the ice, where they would camp on a large floe.

The wreck of Endurance was discovered on March 5, 2022, nearly 107 years after she sank, by the search team Endurance22. She lies 9,869 feet (3,008 m; 1,645 fathoms) deep and is in good condition. Under the terms of the Antarctic Treaty, the six-decade-old pact intended to protect the region, the wreck is considered a historical monument. The submersibles did not touch it; the images and scans will be used as the basis for educational materials and museum exhibits. A documentary is planned, as well.

Mensun Bound, the expedition’s exploration director and a marine archaeologist who has discovered many shipwrecks, said Endurance was the finest he had ever seen. He said it is upright, clear of the seabed and ” In a brilliant state of preservation.”

Endurance’s relatively pristine appearance was unexpected, given the cold water and the lack of wood-eating marine organisms in the Weddell Sea that have ravaged shipwrecks elsewhere. Mr. Bound also described the wreck as “intact” Hurley’s photographs before the sinking had shown major damage to, and the collapse of, the ship’s mast and rigging, and there had been damage to the hull.

Prior to the Endurance voyage, Shackleton had established himself as a polar explorer after a career in the merchant navy. He had to leave a 1906 Antarctic expedition due to ill health, but led another successful one south in 1908. His exploits earned him a knighthood, becoming Sir Ernest Shackleton in 1909.

Shackleton’s final Antarctic mission started with grand ambitions. Having recruited 27 men, he was hoping to lead some of them on the first-ever full crossing of Antarctica by land, just a couple of years after Norwegian Roald Amundsen had become the first person to reach the South Pole.