DSME Taking a Big Bath Ahead of Acquisition by Hanwha Group 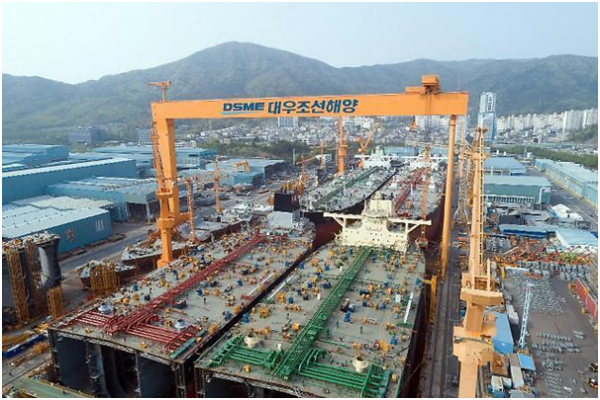 The shipbuilder has recently notified Sovcomflot, a Russian shipping company, of the final termination of a supply contract for one liquefied natural gas (LNG) carrier as the client failed to pay for the vessel construction within the payment deadline. DSME received an order for three icebreaking LNG carriers worth US$850 million from Sovcomflot, but notified the Russian client in May and June of the termination of the contracts for the first two vessels.

It seems inevitable for DSME to set aside additional loss provisions in the fourth quarter due to the final decision to terminate the LNG carrier contract. The LNG carrier order cancellations in May and June were also reflected in earnings in the second quarter.

However, with the termination of the contract on the last of the three vessels, the Russia risk was removed.

DSME is taking a big bath to remove various potential risks at once ahead of the signing of the main acquisition contract with Hanwha Group.

DSME announced that its operating loss in the third quarter was estimated at 627.8 billion won on a consolidated basis, a 33-fold increase compared to the same period of 2021. Industry insiders predicted that DSME would be able to cut its losses in the third quarter, as LNG carrier prices had continued to rise and its order intake had increased, but the company’s announced results were opposite to expectations. This is the result of the company’s earnings management ahead of the contract with Hanwha Group.

DSME said at the time of the earnings announcement that it incurred a loss of about 550 billion won in the offshore plant business as a result of an agreement with a client who awarded an offshore plant project. “We need to keep an eye on the situation, as some of the losses may turn into a surplus later if delivery dates are put off and an agreement is reached on expense settlement,” a company official said.

Excluding the one-off expenses of 583 billion won stemming from the offshore plant project and process delays due to strikes at subcontractors, DSME’s operating loss in the third quarter is estimated at 44.8 billion won.

Meanwhile, Hanwha Group completed due diligence on DSME and is preparing to sign the main contract. It is planning to complete the acquisition of DSME by the first half of 2023.