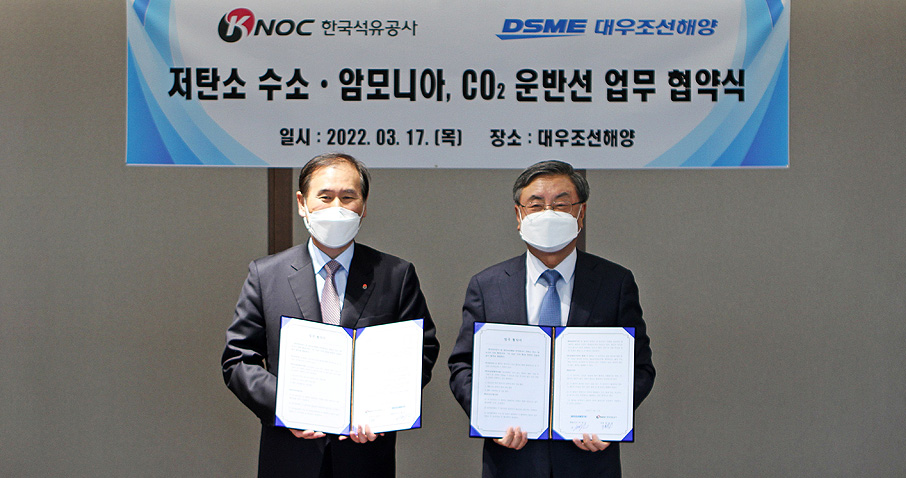 As explained, the move comes in an effort to accelerate the commercialization of decarbonized ships through continuous technology development.

The duo signed a memorandum of understanding on 17 March 2022.

Under the agreement, the two companies decided to form a joint working council and jointly conduct research on core decarbonization technologies using hydrogen and ammonia and related ship development.

DSME develops ships such as low-carbon ammonia carriers and eco-friendly LCO2 carriers that use ammonia as a propulsion fuel.

In addition, it plans to prepare the technology base for the commercialization of such vessels by conducting economic analyses necessary for actual operation.

With a new vision of becoming a ‘carbon-neutral company’, KNOC took the lead in securing an overseas supply chain using its oil development network, such as signing a contract for joint research and pilot introduction of low-carbon ammonia with Abu Dhabi State Oil Corporation (ADNOC) in January.

Based on its experience in constructing and operating oil storage bases and hub terminals, KNOC is promoting the establishment of ammonia storage and distribution infrastructure.

Shipbuilders around the world have been busy developing low-carbon ship propulsion technology that uses ammonia and hydrogen as alternative fuels as well as liquefied natural gas (LNG) as a bridge solution to decarbonized fuel.

“Decarbonization technology development for carbon neutrality in 2050 is now an essential task for the shipbuilding industry,” Sung-Geun Lee, President/CEO at DSME, stressed.