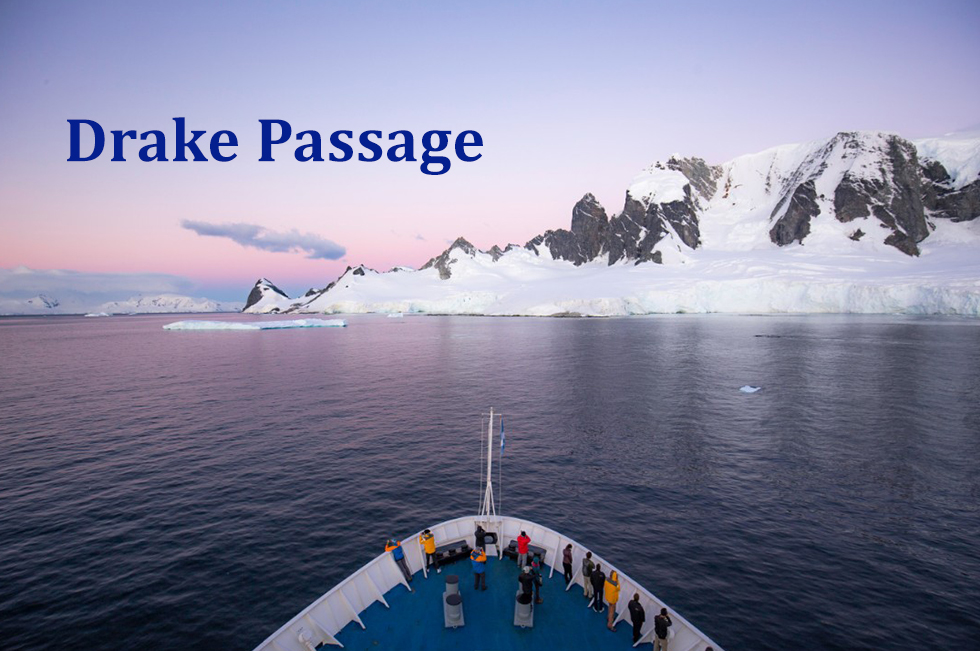 The next one on our list of dangerous sea routes is the Drake passage, the deep, 600 miles (1,000 km) wide waterbody, located between South America’s Cape Horn, Chile, and the South Shetland Islands of Antarctica. It connects the southwestern part of the Atlantic Ocean (Scotia Sea) with the south-eastern part of the Pacific Ocean and extends into the Southern Ocean. Essentially, it is the place where the Pacific, Atlantic, and Southern oceans converge, gaining its reputation as “the most powerful convergence of seas”.

The Drake passage has an average depth of about 11,000 feet (3,400 meters) with deeper regions of up to 15,600 feet (4,800 meters) near the northern and southern boundaries. It is the narrowest passage around Antarctica. Its existence and shape strongly influence the circulation of water around Antarctica and the global oceanic circulation, as well as the global climate.

The winds over the Drake Passage are predominantly from the west and are most intense to the north around Cape Horn. It is known that the cyclones formed in the Pacific sweep west to east across the southern edge of the passage. Even the water within the Drake Passage mainly flows from west to east and forms part of the Antarctic Circumpolar Current, which is the most voluminous current in the world, with an estimated rate of flow between 3,400 and 5,300 million cubic feet (95 and 150 million cubic meters) per second, almost equivalent of 5,000 Amazon Rivers. Besides that, the waves can reach up to 90 feet high. And principally, there is no landmass in the passage to create resistance for the currents at its latitude.

The water temperatures in the zone of the Antarctic Convergence alter sharply, varying from 43 °F (6 °C) in the north to 30 °F (−1 °C) in the south. Basically, the layers of warm seawater from the north and cold seawater from the south collide to form powerful eddies, when combined with strong winds and storms, which can be treacherous for those attempting to navigate it.

Overall, the weather in the Drake Passage is unpredictable, chaotic, notorious, and violent. Therefore, there is no ‘perfect time’ to cross the Drake Passage. So, all these aspects of the violent stretch of turbulent water frequented by icebergs, huge waves, and gale-force wind, make the drake passage one of the most treacherous voyage routes for ships and crews alike.

The passage got its name from the famous English seaman and global circumnavigator Sir Francis Drake. The Drake Passage is the shortest connection between Antarctica and any other landmass. It played an important part in the trade of the 19th and early 20th centuries when much of the trade was carried around the Horn between Europe and the Far East. Prior to the opening of the Panama Canal, the ships practically had to embark on the long trip around the Cape Horn carrying wool, grain, and gold from Australia back to Europe while encountering the Drake during this voyage.

Owing to the extremely hazardous combination of conditions around the area, the Horn demanded a heavy toll from shipping. Furthermore, the only facilities in the vicinity able to service or supply a ship, or provide medical care, were in the Falkland Islands making it an even more risky route.

Therefore, later with the development of transcontinental railroads in North America, as well as the opening of the Panama Canal in 1914 in Central America, the use of Drake for trade gradually decreased. Further, in 1949, the German steel-hulled sailing ships like the Flying P-Liners, designed to withstand the weather conditions around the Horn, became the last commercial sailing ship to round Cape Horn laden with cargo, carrying grain from Port Victoria, Australia, to Falmouth, England.

Currently, various cruise lines offer exciting tours to take passengers on a trip to Antarctica, which gives two chances to enjoy the Drake Passage. “Enjoy” being a relative term, of course. Such cruise lines have ships installed with superior stabilization systems which greatly reduce the rocking and rolling in bad weather.

With a reputation of having the roughest seas in the world, several fatalities have been recorded along the Drake Passage including the 1819 San Telmo shipwreck which was damaged by severe weather leading to the death of 644 army officers and seamen who were on board. Besides that, approximately 20,000 sailors have lost their lives there and its waters hold more than 800 shipwrecks. Strangely enough, Cape Horn has long been known as a sailor’s graveyard due to the strong winds and currents, large waves, and icebergs.