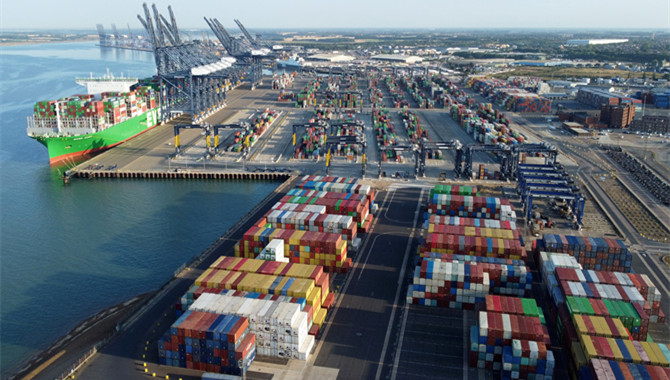 European supply chains are set for further disruption as transport unions step up industrial action in response to soaring inflation.

“Even minor interruptions to port operations can have a major impact on container line network efficiency and cause a domino effect up and down supply chains,” said Christian Roeloffs, CEO & Co-founder of Container xChange.

“Strikes at European ports this year have already been highly damaging to logistics operations, manufacturers, and industry at large. We expect further industrial action to be just as harmful.”

An eight-day strike over pay by over 1,900 workers commenced on 21 August at the port of Felixstowe, the UK’s largest container gateway which handles over four million TEUs (Twenty-foot Equivalent Units) each year.

In response, container lines have omitted scheduled vessel calls at the port and re-routed containers via alternative ports in northern Europe and the UK.

The strike action is set to add to the logistics challenges both the port of Felixstowe and the UK economy already face.

Felixstowe has suffered from congestion and an excess of containers for the last two years. According to Container xChange’s Container Availability Index (CAx), Felixstowe’s average CAx reading for much of 2022 has hovered around 0.9, one of the highest readings in Europe. A CAx reading above 0.5 indicates a surplus of containers while below 0.5 indicates a shortage.

“Felixstowe’s Container Availability Index reading suggests that terminal operators and carriers will likely have had difficulties to clear storage areas of boxes, especially empties, even before the commencement of strike action,” said Roeloffs.

“This interruption of operations will add to operational inefficiencies at the terminal and in the hinterland. It will also have ramifications for carrier networks on intra-Europe and Asia-Europe services.”

Dockworkers at the port of Liverpool have also voted to strike for better pay. Union representatives have not yet confirmed when the strikes will take place.

Europe’s logistics network could see added disorder if more industrial action follows in Germany. Earlier this summer German ports including Hamburg, Bremerhaven, and Wilhelmshaven were rocked by strikes by thousands of dockworkers seeking higher pay.
Collective labor agreement negotiations between trade union ver.di and the Central Association of Germany Seaport Companies (ZDS) are ongoing. A court-imposed moratorium on industrial action expires on 26 August.
“Ports in northern Germany suffered strikes earlier this year as workers there sought higher wages as inflation causes difficulties across Europe,” added Roeloffs. “Our proprietary data shows this resulted in build-ups of containers at terminals and in storage yards. This added to the logistics problems we have seen across Europe this summer where lower water on the Rhine has forced many containers onto rail networks and trucks as barge shipping has become increasingly difficult.”

The port of Bremerhaven saw its CAx jump from below 0.6 in June to over 0.8 in the aftermath of strikes. It has remained above 0.7 since mid-July. The only time the port’s CAx had previously breached 0.7 since 2019 was briefly in early 2021.

The port of Hamburg has also seen consistent CAx readings of more than 0.8 since the summer strike action.

“Container lines have reported that in Germany, while the moratorium has been in place, stevedores have been less willing to perform extra shifts or work at weekends. This has made it difficult to clear backlogs after the earlier strikes,” said Dr. Johannes Schlingmeier, CEO & co-founder of Container xChange.

Levels of disruption vary by port

He added: “How a strike impacts port operations obviously depend on the nature of the port, what level of service is able to continue while the strike is ongoing, and how well-prepared operators and terminals were for disrupted operations.

“What we’ve seen since the start of the pandemic in ports across Europe including Liverpool, Felixstowe, and the major German hubs, is terminals struggling to cope with demand and the multiple disruptive events container shipping has faced. Shortages of trucking capacity and drivers have been added to logjams.

“I think it’s safe to say that strikes will make it more difficult to untangle these pre-existing strains on ocean container logistics and the hinterland barge, rail, and trucking networks on which they rely.”