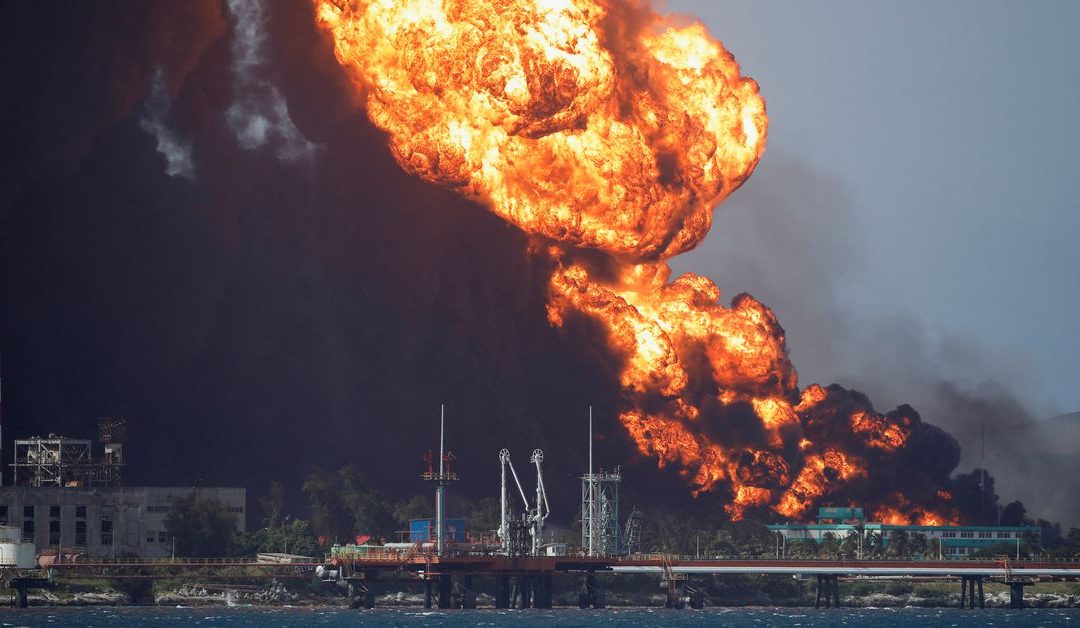 An inferno at Cuba’s largest oil storage facility has killed at least one firefighter, injured many more, and threatens to further swell the fuel import bill for the impoverished island nation that relies on foreign oil for everything from transportation to its power grid.

Cuban officials may need to scramble to set up expensive floating storage capacity to handle imports aimed at easing an acute fuel scarcity, sources and experts said on Monday.

Cuba relies on the 2.4-million-barrel Matanzas terminal, about 60 miles (130 km) from Havana, for most crude and heavy fuel imports and storage.

Matanzas is Cuba’s only terminal with the ability to receive large tankers rated for 100,000 tonnes of deadweight. It also serves as a hub for domestic oil output to be blended for supplying the country’s power plants, and for distributing imported fuel and crude to local refineries.

A large fire spreading since Friday is expected to boost shipping and import costs. Cuba was already struggling to afford fuel purchases, and global tanker freight rates have skyrocketed since Russia’s invasion of Ukraine.

Cuba now may have to seek long-term tanker charters for its storage needs or smaller vessels to carry imports. This logistical problem would be on top of recovery costs for the largest oil industry accident in Cuba decades.

In the first half of the year, Cuba imported 57,000 barrels per day (bpd) of crude and fuel from its main ally, Venezuela, Refinitiv Eikon data showed. The imports arrive onboard shrinking fleets of old tankers owned by Cuba or Venezuela.

The Cuban government has been ramping up purchases from others, including Russia, to ease shortages that have led to long lines of drivers at stations and to power rationing. President Miguel Diaz Canel has complained about almost unaffordable fuel prices this year.

The Liberia-flagged tanker NS Laguna is scheduled to arrive in Matanzas next week carrying some 700,000 barrels of Russian oil, according to Eikon. The vessel follows a delivery of Russian fuel oil to the country in July.

If Matanzas’ containment walls can stop the fire from spreading to port berths, the receiving portion of the facility could still be used for discharging imports and transferring the oil to smaller tankers for floating storage, experts said.

Once the fire is extinguished, Matanzas’ berths could be used to make an “u” to fill other vessels, which does not represent a difficult technical challenge.

A switch to floating storage might lead Cuba, a heavily sanctioned country, to ask the U.S. government for relief from rules limiting the flow of vessels touching the island’s ports, the experts said.

“The most likely scenario now is that authorities will let burn the product remaining in the tanks while keeping the area as cold as possible by using water,” said Lino Carrillo, a Canada-based expert and former executive at Venezuela’s state oil company PDVSA.

Following a fire of the proportions seen in Cuba, recovery typically takes time and millions of dollars in repairs, according to analysts.

“Affected tanks will be useless after the fire and everything else connecting them within the containment walls,” Carrillo added.