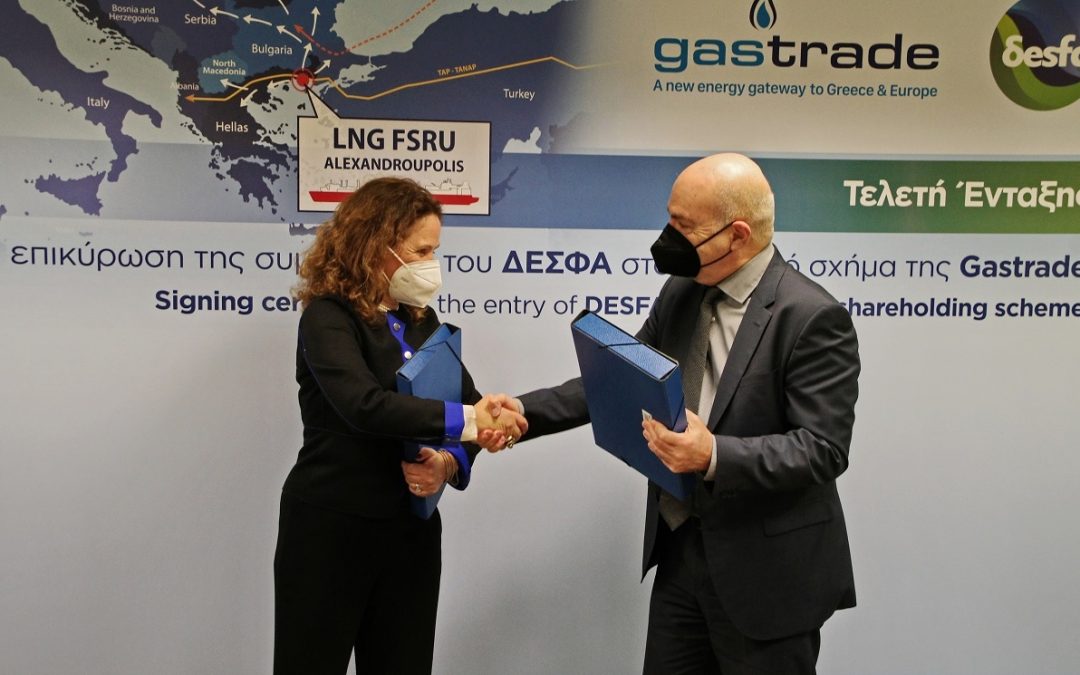 Greek gas grid operator DESFA is officially ratified for its participation in the shareholding structure of Gastrade, the company that develops the FSRU of the LNG project in Alexandroupolis.

The participation of DESFA in the shareholding structure of Gastrade with the acquisition of 20 per cent of its share capital by the operator, is now official.

In other words, Maria Rita Galli, CEO of DESFA, and Elmina Copelouzou, Gastrade’s board chairman, signed the shares’ transfer agreement.

Gastrade is the company that develops the Floating Storage and Regasification Unit (FSRU) of liquefied natural gas (LNG) in Alexandroupolis.

Previously, the European Commission approved the acquisition of joint control of Gastrade by DESFA.

Kopelouzou stated: “Today, another important step for the emergence of Greece and especially of Alexandroupolis as an energy hub for the Balkans and Europe is made…The project of the Terminal in Alexandroupolis will play a leading role in the green transition of European networks while strengthening the security of energy supply.”

Galli added: “DESFA’s long experience in the management of the LNG terminal of Revithoussa makes it a valuable partner with top know-how and is proof of its constant commitment to the development of natural gas infrastructure. We continue to invest in new technologies (…) always moving in the strategic direction of the energy transition.”

The construction of the LNG terminal will offer opportunities for new natural gas exports to the region. Moreover, this is a crucial European project of Common Interest (PCI ), which is a priority for the EU.

In addition, it promotes competition among gas suppliers and supports a transaction hub in the wider region of Southeastern Europe. This would lead to lower prices that will benefit all final consumers.

The FSRU will be connected to the national gas transmission system with a 28 kilometres long pipeline. LNG will specifically go to the markets of Greece, Bulgaria and the wider region; from Romania, Serbia and Ν. Macedonia, as far as Moldova and Ukraine.

Finally, the terminal is expected to start operations by 2023.