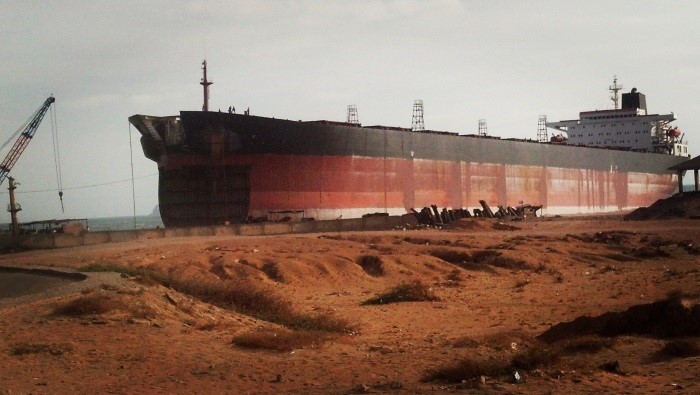 The ship recycling market has kept up its recovery pace, with prices rising to the levels close to the pre-Covid period. In its latest weekly report, shipbroker Clarkson Platou Hellas said that “the market continues to encourage with further improvement in price levels being indicated this week as some privately concluded sales have reached levels not seen since the Coronavirus outbreak emerged which naturally depressed rates and sentiment across the sub-continent. This has come from a mini resurgence in Bangladesh where demand has returned as the local waterfront comes to the realisation that they have been left behind their neighbouring counterparts and need to start re-acquiring tonnage, just like they were at the impressive rates seen earlier in the year. We will therefore have to wait to see if India can maintain itself against this latest competition as Pakistan continues to be the strongest market and looks set to continue their recent momentum into the foreseeable future”.

The shipbroker added that “despite a flurry of negotiations with people slowly but surely returning to their offices, there still seems to be a lack of actual sales concluded, however some may still be concluded ‘off-market’ and will come to light as and when. As aforementioned, with many of the global shipping offices returning to their offices, we would expect to see a late flurry of activity as people make for some of the lost time away and prominent decisions can be made once again. Turkey has made some marginal gains this week with local fundamentals improving and the conventional HKC tonnage heading to the Aliaga shores starting to dry up. However, this cannot be said for EU tonnage where the market continues to be flooded with potential candidates as it remains the only viable commercial option for Owners disposing of their vintage units. But capacity remains a huge concern as each recycling facility is basically full until the end of the year and into 2021 in some cases. However, we understand that three new yards are being audited this month and we hope that the EU approval will not take the usual arduous length of time thereafter and provide a quick solution in order to provide some much needed extra capacity in the Turkish market”, Clarkson Platou Hellas concluded.

In a separate note, shipbroker Intermodal said that “average scrap prices in the Indian subcontinent have shown no retreat at all with cash buyers continuing to absorb demo candidates at considerably high remuneration levels. The USD 350/LDT is the benchmark that owners are aiming to reach and surpass; this has been the case in many demolition transactions during the past weeks. Some very high scrap prices have been fetched from Bangladeshi breakers, which illustrate that the latter may be considered as the best demolition destination in the coming weeks. Should this positive trend among Bangladeshi breakers continue, they may very well leave behind their Pakistani counterparts who are currently still in the lead. At the same time, India is regarded as the main destination for HKC recycling; however, with more than 1 million COVID-19 cases during the last week, it remains to be seen whether or not new lockdowns will take place as a measure to restrain the virus from spreading. Average prices in the different markets this week for tankers ranged between $205-360/ldt and those for dry bulk units between $200-340/ldt”.

Finally, Allied Shipbroking added that “a relatively strong week for the ship recycling market, with a fair number of units concluded for demo during the past few days or so. The main ship recycling destinations in the Indian Sub-Continent have succeeded in keeping a rather bullish sentiment, despite the fragile state noted since the onset of the Covivd-19 pandemic. Pakistan remains the “top” market for the moment, with buying appetite though, already indicating some signs of softening, given now the amassed tonnage capacity in the region. On the other hand, Bangladesh is currently the market showing the highest potential in the India Sub-Continent. Given the sort of relief from the excess inventory of previous months, it seems to be ready to compete heavily for any fresh tonnage that comes to market. Moreover to this, a lot will depend on scrap price levels, that are now hovering at a “balanced“ level of around US$ 350/LDT. Finally, for India, things are very uncertain, given the increasing number of new COVID cases. With no clear picture from this front, it is very difficult, to point to any robust trend taking shape, even in the short-run”, the shipbroker concluded.