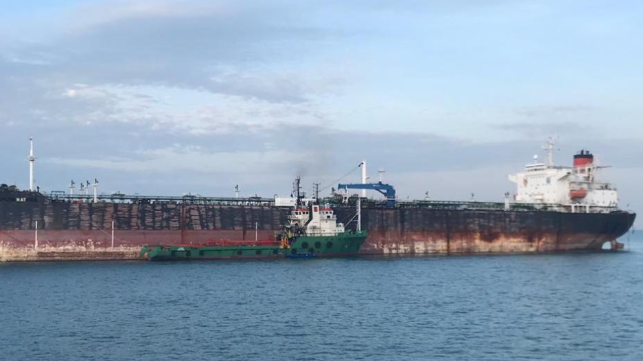 A decommissioned FSO that was sold to a Bangladeshi breaker for scrap is now anchored off Mumbai, awaiting news on her final resting place.

The Radiant, ex name Jesslyn Natuna, is a 1983-built FSO previously flagged and operated in Indonesia. In 2018, ater she ceased her term of commercial service at the Natuna offshore field, she drifted aground near Tambelan. She was refloated and sold for scrap to a cash buyer, identified by NGO Shipbreaking Platform as SOMAP International.

According to the NGO, Jesslyn Natuna departed Indonesia in mid-April with a substantial quantity of hazardous waste on board. The organization contended that she was carrying 1,000 tonnes of slop oil, 500 tonnes of oily water and 60 tonnes of sludge oil. The sludge allegedly tested out at nearly 400 milligrams of mercury per kilo, a level considered unusually high.

The NGO Shipbreaking Platform, Basel Action Network (BAN), European Environmental Bureau (EEB), IPEN, Nexus3 Foundation and Zero Mercury Working Group contended that the vessel’s export violated international laws on the transborder transfer of toxic waste. They called on the three primary shipbreaking nations – Bangladesh, India and Pakistan – to refuse permission for entry. Bangladesh and India both followed the recommendation and have refused entry to the vessel.

This week, the Jesslyn Natuna (now sailing as Radiant) arrived off the coast of Mumbai, under tow by the 1985-built offshore tug S Cas (ex name VOS Signal). The Mumbai Port Trust has refused her entry unless her operator can produce more documentation, the trust’s deputy chairman told the Mumbai Mirror.

Radiant’s final destination is a matter of some disagreement. NGO Shipbreaking Platform understands that she is under way for the beaches at Gadani, Pakistan, but Indian Coast Guard Inspector General Anand Badola told the Mirror that she is headed for Alang. Haresh Parmar, honorary secretary of Alang’s Ship Recycling Industries Association, told The Indian Express that the Gujarat police have asked Indian yards not to buy the ship – and that it does not appear that any of the association’s members have done so. As for the ship’s own representatives, her owner’s agent denied that she has toxic waste on board, and said that she is headed for Dubai – a destination not known for ship recycling.