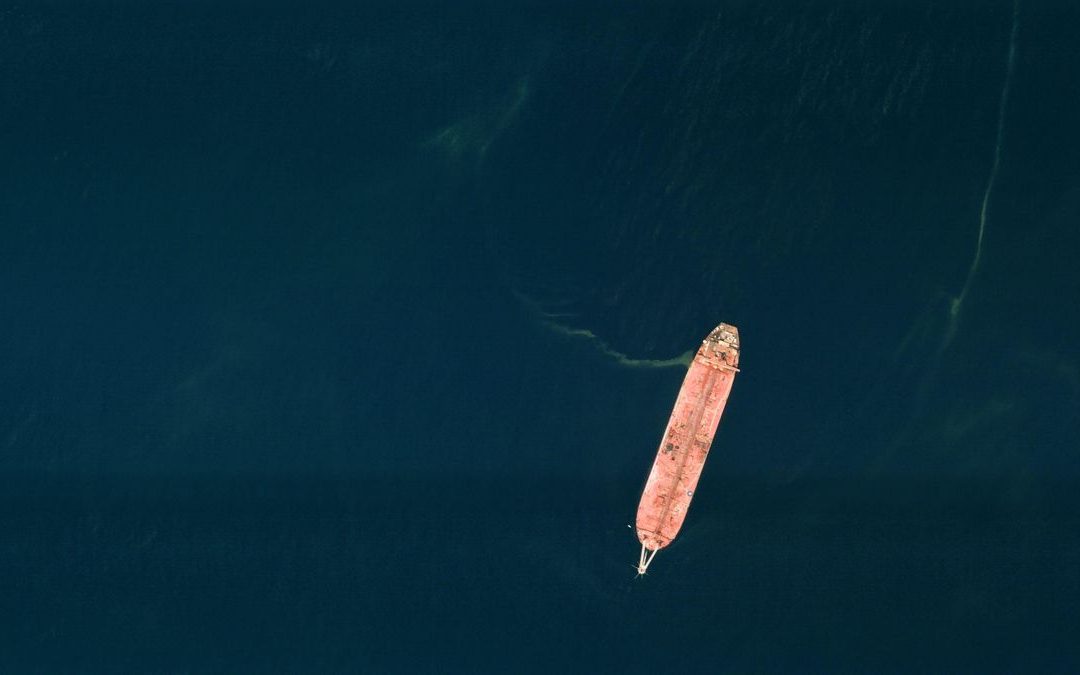 The satellite image above shows a decaying floating storage and offloading (FSO) facility moored off Yemen’s west coast, threatening to cause an environmental disaster in the Red Sea. The SAFER, containing an estimated 1.148 million barrels of light crude oil, was flagged in 2015 as a potential threat when maintenance halted due to Yemen’s civil war, according to the Conflict and Environment Observatory (CEOBS). The ageing supertanker, which was turned into an FSO in the 1980s, is idling in a corrosive environment, suffering from leakage and broken equipment, according to the maritime consultancy I.R. Consilium. A major oil spill could occur if the tanker is left in its current condition, even an explosion is possible due to its deteriorating status, researchers have reiterated on various occasions. A plethora of reports, including from the United Nations, warn of its detrimental impact on the lives of millions of people, the ecosystems in the Red Sea, and shipping. Experts monitoring the SAFER have called it a “floating bomb”.

Why has no solution been implemented yet despite the abundance of information on the risks posed by the SAFER? And what needs to be done to avoid a possible catastrophe?

“Impossible to Isolate the SAFER from the Wider Conflict”

Laleh Khalili, a professor of international politics at Queen Mary University of London and author of Sinews of War and Trade: Shipping and Capitalism in the Arabian Peninsula, noted that the Yemeni conflict and its ramifications have contributed to the SAFER’s situation. “The initial blockade of Yemen by the Saudi-UAE coalition, and later the Houthi resistance to external involvement in securing the vessel have all been factors,” she said.

The SAFER, which is owned by the Safer Exploration & Production Operation Company (SEPOC), is moored off the Ras Isa port in the Red Sea. The area is controlled by the Iran-aligned Ansar Allah movement (also known as the Houthis), which has been fighting against an internationally recognized government backed by a Saudi-led Coalition which intervened in Yemen in 2015. The Houthis have been accused of using the FSO as a bargaining chip and delaying a long-awaited UN visit to inspect it.

“The SAFER has become the Houthis’ strongest weapon in the conflict,” said Yemeni activist and economic researcher Abdulwahed al-Obaly, who is also a former SEPOC employee. However, he noted that the other combatants in the war “and the United Nations” also bear responsibility “because they are playing a role in perpetuating the war.”

Doug Weir, a research and policy director at the Conflict and Environment Observatory (CEOBS), which in May 2018 raised the alarm over the risks posed by the FSO, explains that the SAFER crisis cannot be separated from the wider conflict that has killed nearly 112,000 people, according to UN figures.

“Had Yemen been at peace, then maintenance of the SAFER would have continued and, while SEPOC would still be facing questions over the lifespan and safety of the vessel, any risks would have been more manageable,” he noted. Weir is one of many researchers who highlighted the risks of the SAFER for years.

“From what we have seen, the Houthis must bear primary responsibility for the delays to date. Nevertheless, it’s impossible to isolate the case of the SAFER from the wider conflict, which of course has framed and informed the political strategy of the Houthis,” Weir added.

Researchers studying the impact of armed conflicts have also noted how the SAFER and its environmental risks are being used as leverage to score political and military gains. “This large oil storage tanker has become an example of how the risk of an environmental disaster is used as a negotiation tool in a conflict already responsible for grave humanitarian consequences,” said Wim Zwijnenburg, a humanitarian disarmament project leader at PAX, a Dutch peace organization.

The Priority: “Oil Needs to First Be Safe and Secure”

The SAFER is an aging supertanker. It was built in 1976 and was originally a seagoing vessel, according to I.R. Consilium, before it was converted into an FSO. The SAFER has been sitting off Ras Isa since 1988, operating as both a storage facility and an export terminal, according to experts from the maritime consultancy.

During a webinar organized on August 27 by the Mashora Group under the title “Averting a Major Oil Spill off Yemen’s Coast”, David Soud, head of research & analysis at I.R. Consilium, clarified the focus of any solution, stressing that the only safe option is to offload the crude oil onboard the SAFER. Before reaching an agreement over who will sell the oil, and how the revenues will be apportioned, “the oil needs to first be safe and secure,” he noted, while warning that keeping the oil onboard “is not safe, not tenable, and it is not responsible.”

“It (the SAFER) is really past the point of repair.”

I.R. Consilium has proposed to move the cargo via Ship-To-Ship (STS) transfer to another tanker that would remain in the same location where the SAFER is moored, “while other considerations are worked out.”

In an email exchange, Soud clarified that the SAFER “needs to be replaced with a seaworthy Very Large Crude Carrier (VLCC), which could hold up to around 2 million barrels and therefore all the SAFER’s cargo.” The alternative option, he added “would be two smaller tankers, but a VLCC would be preferable.” This is the option I.R. Consilium has been publicly advancing.

All the information on the SAFER is available to the public and experts have been explaining what needs to be done to avert a disaster for the better part of two years. Yet no solution has been agreed upon.

“There have been so many false dawns so far that we will only be certain that an assessment will take place when the team is onboard,” said Weir from CEOBS. “And of course, it’s important to remember that the initial assessment is only the first step in what will likely be a very long and drawn out process.”

As SAFER Sits in Red Sea, Another Stricken FSO Idles in Caribbean

While the hazardous FSO SAFER idles in the Red Sea, another FSO in the Gulf of Paria, between Venezuela and Trinidad and Tobago, has also caught the attention of experts.

The Venezuelan-flagged NABARIMA recently posed a risk of spilling, before efforts were reportedly made to bring the situation under control. The stricken oil tanker, which is still carrying around 1.3 million barrels of crude oil, is operated by the Petrosucre joint venture between state oil company Petroleos de Venezuela and Italian energy company Eni. It has been out of operations since 2019 mainly due to US sanctions. While ready to “ensure the safe” offloading of the FSO, but wary of US restrictions, Eni said in a tweet on October 23 that it had submitted a proposal to Venezuela and “will be able to proceed only after PDVSA (majority shareholder) approves it and upon formal assurance by the US authorities to risk no sanctions either for Eni and its contractors.”

Venezuela is reportedly working to offload the crude via STS to another tanker that would be transported to onshore storage, according to a report by Argus published on October 23.

Washington has said its sanctions on Venezuela are not “designed to target activities addressing safety, environmental, or humanitarian concerns,” and voiced its support for “immediate action” to address the NABARIMA. However, this case shows how sanctions can yield unexpected consequences on urgent matters related to the environment, and on infrastructure that requires access to resources for regular maintenance. “It is really important to note that the maintenance of such vessels is a round-the-clock task, since they are at sea and require constant attention,” noted Professor Khalili.

There are differences between the SAFER and NABARIMA. However, they both reveal inadequate consideration from concerned parties regarding the potential for significant environmental damage.

“Ultimately, in both cases, the actors involved on all sides have considered the sanctions and the war as more urgent issues to be addressed than the possibility of environmental damage and devastation that the leakage of such oil would cause,” said Khalili.