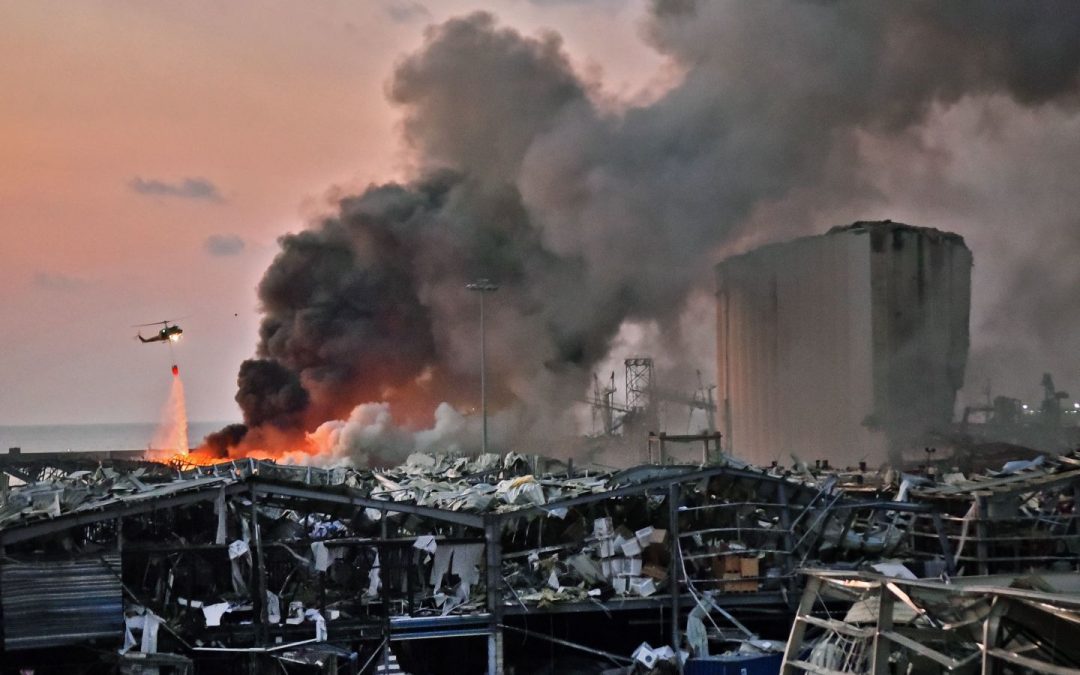 A massive explosion ripped through central Beirut on Tuesday, killing dozens of people, injuring thousands and blowing out windows in buildings across the city.

The blast near Beirut’s port sent up a huge mushroom cloud-shaped shockwave, flipping cars and damaging distant buildings. It was felt as far as Cyprus, hundreds of miles away, and registered as a 3.3 magnitude earthquake in the Lebanese capital.
Lebanon’s Prime Minister, Hassan Diab, said that 2,750 tons of ammonium nitrate, a highly explosive material used in fertilizers and bombs, had been stored for six years at a port warehouse without safety measures, “endangering the safety of citizens,” according to a statement.
The Prime Minister called the storage of the material “unacceptable” and called for an investigation into the cause of the blast, with the results released within five days, the statement said.
Lebanon’s General Security chief Abbas Ibrahim said the “highly explosive material” had been confiscated years earlier and stored in the warehouse, just minutes’ walk from Beirut’s shopping and nightlife districts.
Initial reports blamed the explosion on a major fire at a warehouse for firecrackers near the port, according to Lebanese state news agency NNA.
The death toll from the blast is likely to continue to climb as more bodies are pulled from the wreckage. At least 78 people are known to have died and a further 4,000 wounded, Hamad Hasan, the country’s health minister said, according to Reuters.
“There are many people missing until now,” Hasan said. “People are asking the emergency department about their loved ones and it is difficult to search at night because there is no electricity. We are facing a real catastrophe and need time to assess the extent of damages.”
A red cloud hung over the city in the wake of the explosion, which took place just after 6 p.m. local time (11 a.m. ET), as firefighting teams rushed to the scene to try to put out the initial fire. Footage from the scene captured the injured staggering through streets in the capital, and ambulances, cars and military vehicles packed with the wounded. One resident said the scenes looked “like an apocalypse.”
At least 10 firefighters are missing, according to the city’s governor Marwan Abboud, who said the scene reminded him of “Hiroshima and Nagasaki.”
“In my life I haven’t seen destruction on this scale,” Abboud said. “This is a national catastrophe.”
Australian Prime Minister Scott Morrison said at least one Australian was killed in the blast and the Australian Embassy building has been “significantly compromised.”
The blast comes at a tense time in Lebanon. On Friday, a United Nations-backed panel is expected to issue a verdict on the 2005 assassination of former prime minister Rafik Hariri, a move many fear will stoke sectarian tensions. The country is also in the midst of an economic meltdown, with ballooning unemployment, a tanking currency and poverty rates soaring above 50%.
Source:- CNN