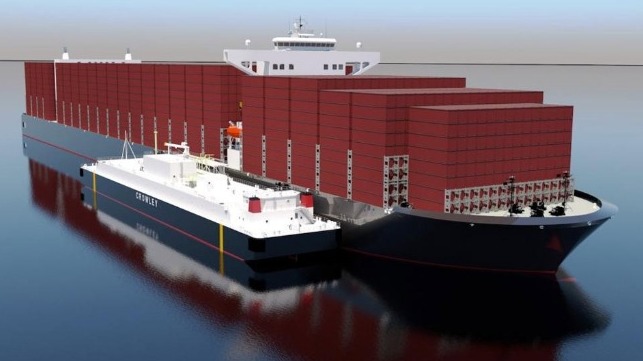 Crowley Maritime and Shell announced plans to work together to build the largest Jones-Act complaint LNG bunker vessel. The vessel, which will be constructed at Fincantieri Bay Shipbuilding of Sturgeon Bay, Wisconsin, is part of the ongoing effort to expand the LNG bunker fleet to meet the rapid growth in LNG as an alternative fuel for large, ocean-going ships.

The 416-foot-long barge, due to enter service in 2024, will have a capacity for 12,000 m3 (3.17 million gallons) of LNG and is designed to meet a broad range of needs to serve ocean-going carriers. Crowley Maritime will own the vessel and has entered into a long-term time charter with Shell for the operation of the LNG bunker barge.

“This barge supports our commitment to helping provide our customers with the energy solution they are looking for,” said Tahir Faruqui, general manager, Global DLNG for Shell. “The shipping sector is making progress toward decarbonization, and LNG offers immediate emissions reduction with the potential to become a net-zero emission marine fuel given the possible roles of bio-LNG and synthetic LNG.”

LNG is currently the fastest-growing segment of the alternative fuel market for long-distance ocean-going vessels. In its Maritime Forecast to 2050 released yesterday, DNV reported that 12 percent of the current global orderbook is for alternative fuels, with LNG making up half of the orders. The report highlights, “Twenty years after the introduction of LNG as fuel, there are more than 500 (as of June 2021) LNG-fueled ships in operation and on order, not including LNG carriers.” DNV’s data says that there are currently approximately 220 LNG-fueled vessels in operation worldwide, with another 354 on order.

The newly ordered vessel will feature advanced technologies in cargo handling capabilities and increased transfer rates. According to Shell and Crowley Engineering Services, they have also developed a state-of-the-art solution to flexibly deliver LNG to various types of LNG containment systems.

The vessel will become the second Jones Act-compliant bunker barge Shell has under a long-term charter in the U.S. It is expected to be deployed to serve LNG-fueled ships that call on ports on the U.S. East Coast starting in 2024.

Fincantieri Bay Shipbuilding is currently building another LNG barge for a different client. That vessel is scheduled to be delivered later this year.