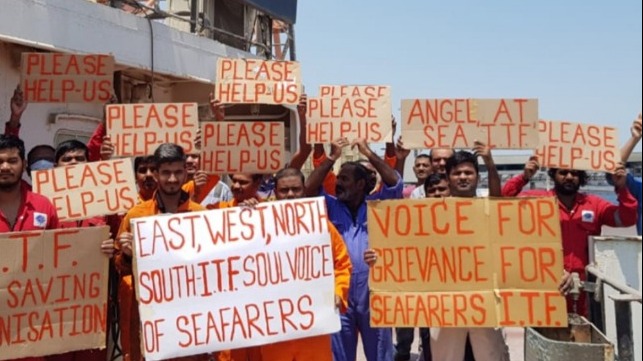 The crew of a  bulk carrier abandoned by its owner and flag state is staging a hunger strike to call attention to their plight according to the International Transport Workers’ Federation. Desperate to get their back wages and return home the crew turned to this drastic action.

The crew, which consists of Indian, Turkish, Azerbaijani, and Bangladeshi seafarers, has been stuck on the ship, the Ula, abandoned for the past 11 months at the port of Shuaiba, Kuwait. According to the ITF, the hunger strike began on January 7 in their effort to get off the ship and recover more than $400,000 in wages owed to them.

The seafarers’ lives remain at risk the ITF says if they continue to refuse food and water. They are reporting that six of the crew were briefly hospitalized to stabilize their blood pressure and sugar levels. They were later returned to the ship.

“The Kuwaiti authorities must act urgently to save these seafarers from killing themselves through this hunger strike,” said Mohamed Arrachedi, ITF Arab World and Iran Network Coordinator for the International Transport Workers’ Federation (ITF). “Most of the crew have been on board for 14 months – and some have now spent over two years on board. These seafarers are simply asking Kuwait to replace them with a local crew so that they can go home to their families.”

The ITF says that Ula’s Qatari ship owner abandoned the ship in Kuwait. The AIS data seem to confirm this as the 37,222 dwt bulk carrier, which was built in 1982, has not registered a position in over a year and was last shown heading to Doha in Qatar.

When a ship is abandoned, the vessel’s Flag State normally steps in to take action to assist the crew. This vessel was registered in Palau. The ship’s registration was terminated in September 2020 and today the ship is officially considered to be flagless. “Palau has failed to do its job,” says Arrachedi. “The ITF repeatedly raised the lack of provisions and wages owed, but no action has been taken.”

The ITF became involved in the case after seeing the situation the crew finds itself caught in and turned to the authorities in the port for assistance. “Since the ship is now flagless, it is left up to the Kuwaiti maritime authorities to resolve the situation.” Kuwait says the ITF has a legal and moral responsibility to assist these seafarers.