Cosco Orders 10 Boxships With A Planned $1.5B Investment To Grow Fleet 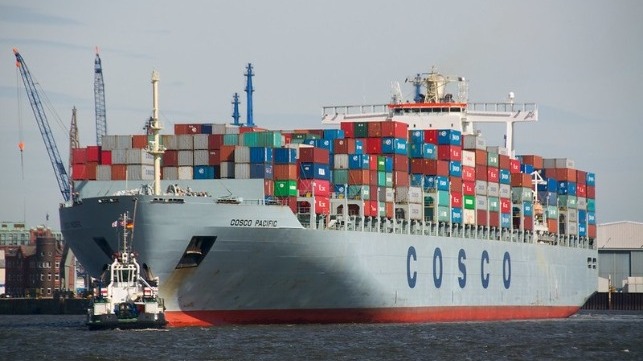 Cosco Shipping Holdings, the parent of Cosco and OOCL, became the latest among the major carriers to announce a significant building program to expand and modernize its container operations. The state-owned shipping company reported orders totaling nearly $1.5 billion that will add a total capacity to the Cosco fleet of nearly 150,000 TEU. Unlike some other major carriers, Cosco’s order is for what is now considered to be mid-sized containerships, similar to the sector that Seaspan is also focusing on with its orders.

In a filing with the Hong Kong Stock Exchange, the company detailed the ships which are being built by Cosco’s shipyard operation in what the stock exchange considers a related party transaction. The bulk of the order consists of six 14,092 TEU containerships with a cost of $146 million per ship or an aggregate cost of $876 million. These ships are due for delivery between December 2023 and September 2024.

The order also includes four 16,180 TEU containerships. The cost per ship is $155 million for an aggregate of $620 million. These slightly larger vessels will be delivered between June and December 2025.

Cosco reports that at least 40 percent of the order will be financed through internal resources with the remaining 60 percent coming from bank borrowings.

The order for the new boxships is said to be in line with the company’s fourteenth five-year plan. Among the reasons highlighted for the orders is to maintain Cosco’s “first-tier position,” as well as expanding capacity. They said they are seeking to increase their competitive advantage as well as to use the new ship to expand into new markets. They also believe that the newer, larger ships will help to lower the cost of transportation.

The combined operations of the Cosco Group currently rank third in the container shipping market with a 12 percent market share according to Alphaliner. According to data from Cosco, as of the end of June 2021, the group consists of a total of 526 containerships with a total capacity of just over three million TEU. Within that, 520 of the vessels are operated by Cosco versus subsidiary lines with a capacity of 2.3 million TEU. The company operates a total of 398 routes, including 264 international routes, 54 Chinese coastal routes, and 80 Pearl River Delta and Yangtze River branch lines. Its ships call at 329 ports in about 100 countries and regions around the world.

News of order comes a week after Cosco Shipping Holdings reported that it expects a net profit of $5.7 billion for the first half of 2021 up from just $139 million two years ago. Contributing to the strong increase in profits was a more than doubling of contract and spot rates the company said. Profits for the first half of 2021 are expected to exceed $27 billion, which would be more than earnings for all of 2020.