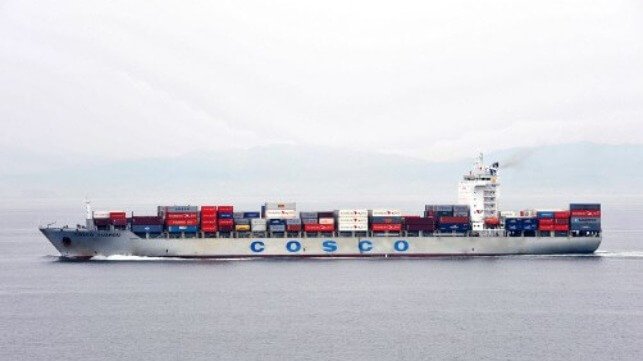 One of COSCO’s containerships has sought a port of refuge aborting a trans-Pacific crossing and returning to South Korea. Early indications are that the vessel encountered a Pacific storm which is believed to have caused an overboard loss of containers as well as a collapse on deck. Few details are currently available on the size of the loss.

The 13-year-old containerships Cosco Nagoya departed Busan, South Korea on November 22 taking the typical trans-Pacific route on its way to Long Beach, California. The vessel apparently turned around two days later heading to Gwangang, South Korea. The vessel is 50,600 dwt with a reported capacity of 4,506 TEU/

Cargo consultants WK Webster issued a warning to clients saying, “We have received reports that fully cellular container vessel, Cosco Nagoya has had an incident resulting in the loss of containers overboard and also collapsed on deck during its passage from Busan shortly after November 23, 2021. Early indications are that this may have been quite a serious incident.”

The accident comes almost one year to the day after the largest loss from a surviving vessel. The One Apus was also eastbound on the Pacific although likely further east closer to Hawaii when it encountered a storm on November 30, 2020. Ultimately it was determined that the vessel lost 1,816 containers including 64 that were believed to hold dangerous cargoes. When the vessel arrived in Japan on December 8, observers were shocked by the extent of the damage. Surveyors hired by WK Webster reported that of the 22 bays on deck, only six appeared to be intact. They estimated that approximately 2,250 could have been impacted and it would be until mid-March 2021 before the vessel returned to service.

COSCO has not provided an official update at this point on the extent of the damage or the number of containers lost. Unofficial estimates are saying that it was a small loss likely less than 50 containers overboard however other containers are believed to be unstable and will require reloading before the vessel could continue its voyage.

Webster is warning that “It is not yet clear when the vessel’s voyage will resume or whether containers will need to be removed, restowed or transshipped.”

It is not the first time that this vessel has had a reported casualty. In December 2013, sailing from Rotterdam to New York, the Cosco Nagoya encountered a storm in the Bay of Biscay. The company reported to French authorities that 79 boxes were lost overboard and the vessel sought refuge in Le Havre, France. In that accident, the boxes were spotted floating in the ocean and later some washed ashore near Brest, France.

Last winter, the Pacific claimed multiple victims. In addition to the One Apus, another One vessel had a smaller loss of containers. Maersk also suffered significant losses with the Maersk Essen losing 750 boxes in January 2021 and forced to seek refuge in Mexico. The Maersk Eindhoven lost 250 containers near Japan when the vessel briefly blacked out after a drop in oil pressure caused an automatic shutdown.

The extent of the losses in 2020/21 caused experts to question the loading practices and navigation of the large containerships. No reports have yet been released into the causes of the significant incidents last winter.