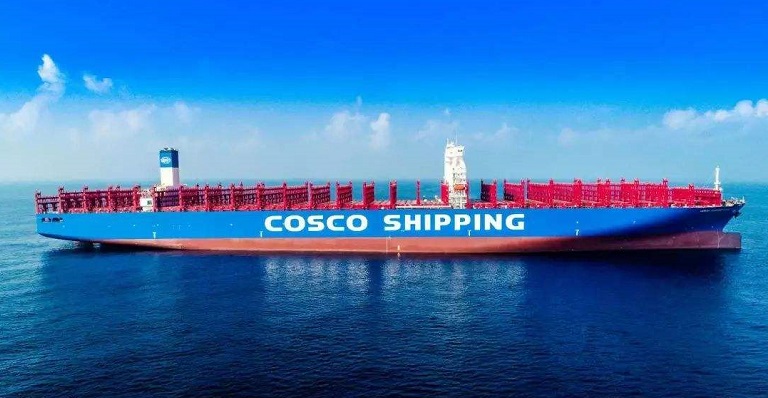 In an effort to spur the development of electric shipping and the battery technology required for the ships, China’s Cosco Shipping will build and operate two 700 TEU electric containerships on the Yangtze River. Due for delivery in late 2023, the vessels are being called China’s first “green zero-carbon intelligent electrification pilot” ships.

Cosco announced that it completed the construction order valued at $18.4 million on March 18 in a ceremony involving 51 companies and institutions. The two vessels will be built at Cosco Shipping’s yard in Yangzhou. Each will be 393 feet long with a beam of 77 feet and a depth of 18 feet. The first vessel is due for delivery in October 2023 followed two months later by the second. They will be operated by Shanghai Pan Asia Shipping, a subsidiary of Cosco, on the Yangtze from Shanghai to Wuhan, a distance of over 600 nautical miles.

Cosco Shipping Development is leading the research to develop the power system for the vessels. They will use containerized batteries that have a capacity of 50,000 kWh charged on shore. Cosco says this project will improve its ability to develop and manufacture the containerized marine box-type battery which will be the size of a 20-foot container. Each vessel will use 36 of the batteries and Cosco envisions developing a network of charging stations and depots to exchange the batteries along the river.

The company expects to accumulate experience from the development and operation of the containerships which can be used to further the development of electric-powered vessels. The goal is to fully electrify the Yangtze and expand to other inland routes including the Pearl River, Bohai Bay, and northern China.

China is developing its expertise in electric shipping. In a separate project, they launched the largest electric river cruise ship. Completed at the beginning of 2022, the Three Georges 1 is powered by a 7,500 kWh marine power battery cruising in the Three Georges Dam region. The cruise ship was due to enter service in April 2022 after initial trials.