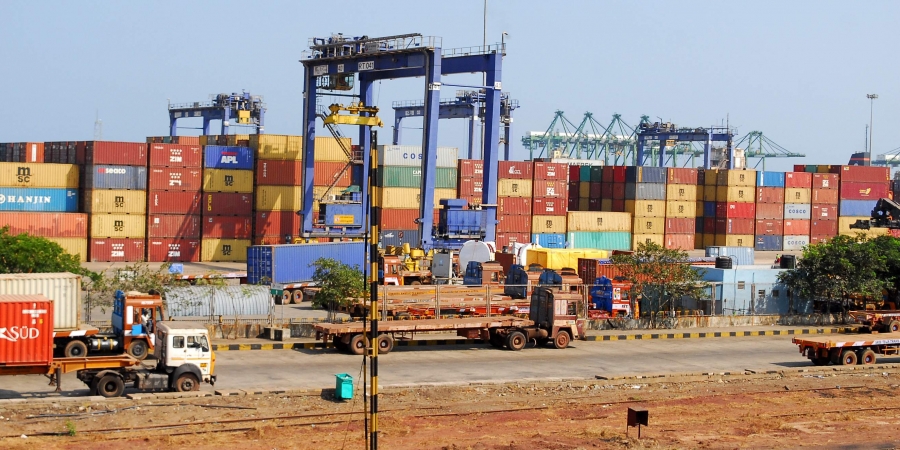 Container cargo handling at India’s major ports tumbled over 30 percent during the April-June quarter of the current fiscal amid the coronavirus pandemic, as per data by ports body IPA.
Container cargo in terms of TEUs (twenty foot equivalent unit) at India’s 12 Major Ports dropped 32.28 percent to 1.74 million in the the first quarter of the current fiscal, according to the latest data from the Indian Ports’ Association (IPA). In terms of tonnage, the container cargo declined 30.11 percent to 26.34 million tonnes (MT) in the quarter.
These ports had handled containers to the tune of 2.57 million TEUs and 37.69MT in terms of tonnage in the April-June period of the previous financial year.
The IPA, which maintains cargo data handled by these ports, in its latest report said “percentage variation from the previous year” in container handling in terms of TEUs and tonnage was 32.28 percent and 30.11 percent, respectively. India has 12 Major Ports — Deendayal, Mumbai, JNPT, Mormugao, New Mangalore, Cochin, Chennai, Kamarajar (Ennore), V O Chidambaranar, Visakhapatnam, Paradip and Kolkata (including Haldia) — that handle about 61 percent of the country’s total cargo traffic.
Ratings agency Icra had earlier said that while all cargo segments are vulnerable, container segment is expected to be more adversely impacted. While general cargo throughput may witness 5-8 percent contraction for the full year 2020-21, the container segment may drop 12-15 percent, it had said. These 12 ports had handled 705MT of cargo in the last financial year.
Total cargo traffic includes container cargo, coal, fertilisers, petroleum products and other segments.
Cargo handled by the Country’s Major Ports declined by 19.68 percent to 141.92MT in the first quarter of this fiscal. These 12 ports had together handled 176.69MT of cargo during April-June period of 2018-19. Ports like Chennai and Kamrajar saw their cargo volumes nosedive about 40 percent during April-June, while Kolkata suffered a drop of over 30 percent.
While Chennai port saw 39.91 percent decline in cargo handling to 7.28MT, Kamarajar (Ennore) port suffered a drop of 39.41 percent to 5.16MT in April-June, as per IPA data. Cargo handling at Cochin port slipped 33.78 percent to 5.63MT, while the same at JNPT declined 31.38 percent to 12.09MT. Kolkata port logged a fall of 27.26 percent to 11.72MT.