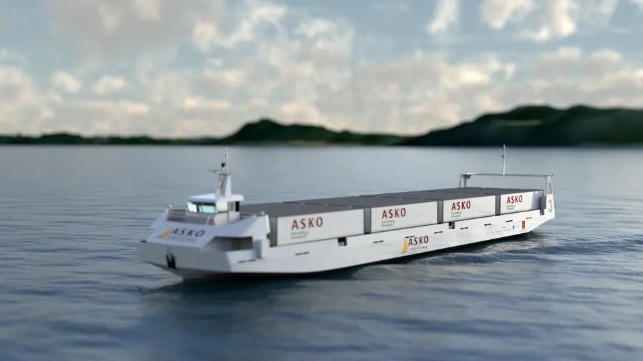 Cochin, the builder of India’s first indigenous aircraft carrier and many of its other naval vessels, is experienced in complex shipbuilding. By winning the global tender to build these high-tech vessels for Kongsberg / Wilhelmsen joint venture Massterly, it is taking a new step ahead into autonomy.

“This is an important project for Cochin Shipyard. Though the vessel is a small one, the impact the vessel could make in the field of autonomous and electric vessel segments is huge,” said Madhu S Nair, chairman and managing director of the shipyard.

The two new vessels will operate on a set crossing on the Oslofjord, each carrying 16 truck trailers at a time. They are expected to eliminate 1.2 million miles of Asko’s truck traffic on a trip between warehouses on either side of the fjord, resulting in savings of 5,000 tons of CO2 annually.

Cochin is located in Kerala, which was hit hard during the Indian COVID-19 surge in May (and remains the most active region in India for COVID case counts). Cochin Shipyard shut for several weeks in May at the peak of the latest outbreak, and it assigned some of its pipefitters to provide five local hospitals with oxygen supply systems, fulfilling a vital need for coronavirus treatment.

The contract for the two new autonomous vessels was signed in July 2020, and the steel-cutting ceremony was held on November 25, 2020. The keel-laying marks the next phase in construction.

“It is a proud moment for me to be here at Cochin Shipyard. This is not only a keel laying ceremony but also an event to strengthen the relationship between India and Norway,” said Kerala Minister for Industries P. Rajeeve, who conducted the keel-laying ceremony on behalf of Asko. (Kai Just Oslen, Managing Director of ASKO Maritime AS, attended remotely by teleconference.)

Kongsberg and Massterly predict that there will be more contracts like this one in the years ahead.

“We have seen a tremendous increase in interest since the announcement of Yara Birkeland back in 2017,” said An-Magritt Ryste, Kongsberg’s Product Director for Next Generation Shipping, speaking to TME earlier this year. “Prior to this, there was a lot of talk about autonomous vessels – now we see contracts being signed in all the major maritime hubs across the globe. Where traditional shipowners tend to take a more incremental approach, non-traditional shipowners [like Asko] are either interested in a highly digital offering or go directly towards autonomous operation.”