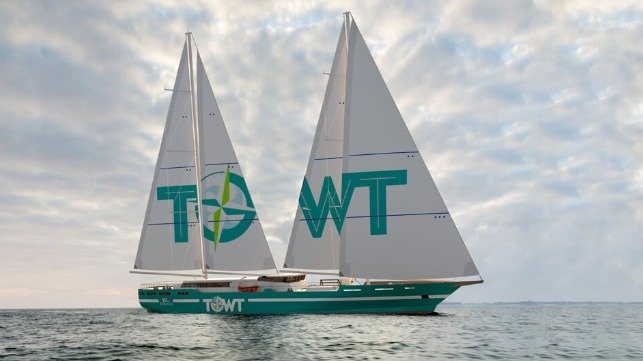 In recent years, several companies have presented plans to take cargo shipping backward to the age of sail-powered transportation. In the latest advancement in these concepts, French shipping company TOWT (TransOceanic Wind Transport) announced that it has signed a shipbuilding contract for its custom-designed, newbuild sailing cargo ship. The vessel will be built by the Piriou naval shipyard company headquartered in France and is scheduled to enter service in the summer of 2023.

The 260-foot-long sailing cargo ship will have a commercial capacity of 1,100 tons of cargo. TOWT forecasts that the vessel will carry up to 20,000 tons of goods per year while sailing to various destinations around the globe. They envision sailing to New York, Shanghai, Abidjan, the Caribbean, Brazil, Colombia, and Mexico, based on commercial demand and opportunities.

TOWT selected Piriou in July 2019 to build the concept ship with the goal of launching a fleet of four vessels by 2026. Expanding on the initial design developed by Nantes-based Herskovits & Tobie naval architects, Piriou took over the technical specifications and planning for the vessel in February 2021. The vessel has evolved according to TOWT “to rationalize and industrialize its rigging and propulsion, while at the same time increasing her performance and commercial capacity, in cargo and in passengers.”

Designed for operations on an industrially-scale decarbonized ship, TOWT says each vessel will be moved by a set of sails with over 23,000 sq. feet of sail area providing speeds of approximately 10 knots. Atlantic crossings between Le Havre, France and New York are expected to take about two weeks while other routes will be longer duration. In addition to the cargo, the vessels will be able to carry up to 12 passengers and operate with a crew of seven.

Besides the climate impact, which will be virtually zero carbon emissions by using the sails from primary propulsion supported by a motor, the vessel will also be able to reduce air, water, and noise pollution caused by maritime transport. They estimate that the sailing cargo ship will reduce CO2 emissions by 20g of CO2 per ton transported per kilometer, thus saving about 3,000 tons of CO2 each year.

“By building a modern, iconic sailing cargo ship, Piriou and TOWT are promoting an industry left aside for about a century with new techniques in order to meet with the climate emergency challenge,” the companies said announcing the construction contract.

Convinced of the opportunities to redeploy sails to drive the decarbonization of the maritime industry, TOWT began chartering existing sailing ships in 2011 to develop the commercial market. Over the past decade, the company reports it has transported nearly 2,000 tons of goods on 19 different vessels.

Among the early adopters that TOWT said have used their vessels are French chocolate-maker Cémoi, specialty coffee supplier Belco, Martell Mumm Perrier-Jouët, and EthicDrinks, a specialist in organic wines. Currently, the company says over 30 cargo owners intend to utilize its future vessels.