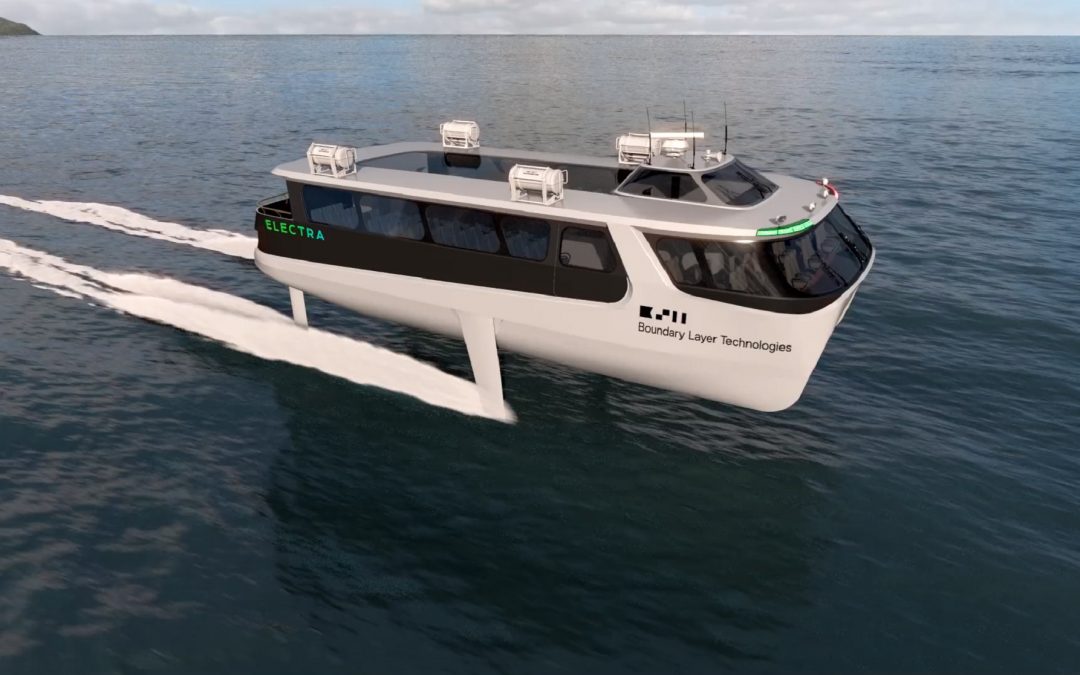 A California-based start-up released its design concepts for the first fully electric hydrofoil ferry. Using the revolutionary design, the company says will make it possible to double the speed and range of existing electric ferries.

“Hydrofoil technology is the key to enabling electrification of passenger ferries” explains Ed Kearney, CEO of Boundary Layer Technologies. “By reducing the drag of the vessel by a factor of two, the powering requirements are also halved, which increases the speed and range of what an electric ferry can do. This opens the door to the electrification of the majority of ferry routes across the world.”

Known as Electra, the ferry will have a range of up to 100 nautical miles and a cruising speed of 40 knots, which Boundary Layer Technologies says is more than twice that of any electric ferry currently in operation.  The company says that it has already developed the hydrofoil and control systems required for Electra, and plans to have the first vessels in operation by the beginning of 2024.

The prototype design features two layouts, one for 240 passengers that would be used for commuter service with elements such as bike storage and a typical ferry-style seating arrangement. The lower section of the vessel is devoted to the battery and propulsion systems. The second design is for a 150 seat luxury configuration.

The designs for Electra show an overall length of 82 feet and a beam of 33 feet. Electra will be built of aluminum with two 2 MW AC motors and two Z-drive submerged propulsion pods. It would use lithium-ion battery cells with a total capacity of 9000kWh. Based on a 2400kW charging system, a full charge could be achieved in less than three hours the company reports.