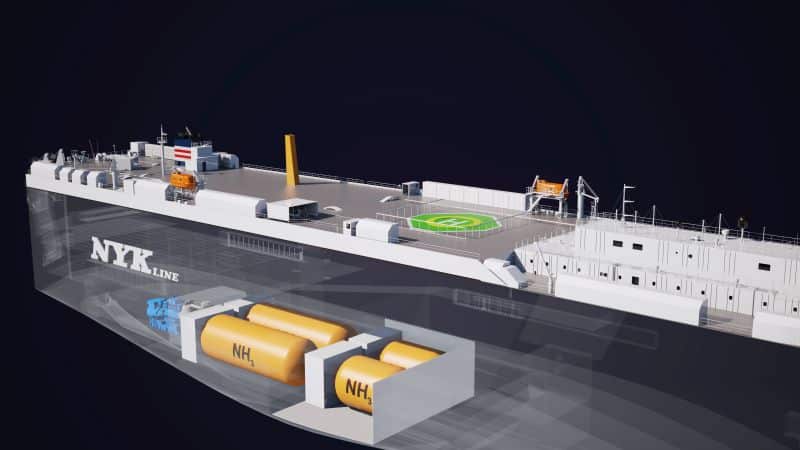 Background
NYK and MTI (hereinafter, the NYK Group) have established the long-term target of net-zero emissions of greenhouse gas (GHG) by 2050 for the NYK Group’s oceangoing businesses. To achieve this goal, the NYK Group has been expanding its fleet of LNG-fueled ships in response to the Group establishing the LNG-fueled vessel as a bridge solution to vessels propelled by future marine fuels, such as ammonia or hydrogen.

In this project, which started in September 2021, the NYK Group and Elomatic started the development of a concept design for an ARLFV that can efficiently be converted from an LNG-fueled vessel to an ammonia-fueled vessel, based on the assumption that ammonia will become a next-generation marine fuel.

A concept design considers the specifications of a ship from an operation aspect, including factors such as load capacity, voyage distance, ship speed, fuel capacity, etc. When an ARLFV is ordered from a shipbuilder in the future, this concept design can then be used.

Results of Development
During Phase 1 from September 2021 to the end of February 2022, we designed an ARLFV to perform the functions of a pure car carrier and a post-panamax bulker. We mainly addressed the below issues, designed the concept, and determined issues that are not yet technically feasible.
・ Material of the tank to be loaded
・ Placement of additional tanks for ammonia, which has a larger volume than LNG
・ Hull structure strength and stability due to the addition of tanks
・ A device that supplies ammonia to the main engine
・ Confirmation of rules such as ship classification rules for safe use of ammonia fuel, etc.

Future Schedule
During Phase 1.5, which will continue until June 2022, we will design a similar concept for a capesize bulk carrier and a very large crude oil carrier. Furthermore, until the end of 2022 in Phase 2, we will proceed with the actual design of an ARLFV with a shipyard and marine manufacturers, reflecting the results obtained in the concept design, such as the optimal fuel-tank layout, ammonia-fuel supply device, and structural strength of the hull.

This project will be completed when the actual ship design is completed, Afterward, we will propose to customers and business partners a transportation service that can transition trouble-free from an LNG-fueled vessel to an ammonia-fueled vessel through use of an ARLFV. We plan to offer customers ARLFV contracts in 2023 and aim to complete building the first ARLFVs in 2025. 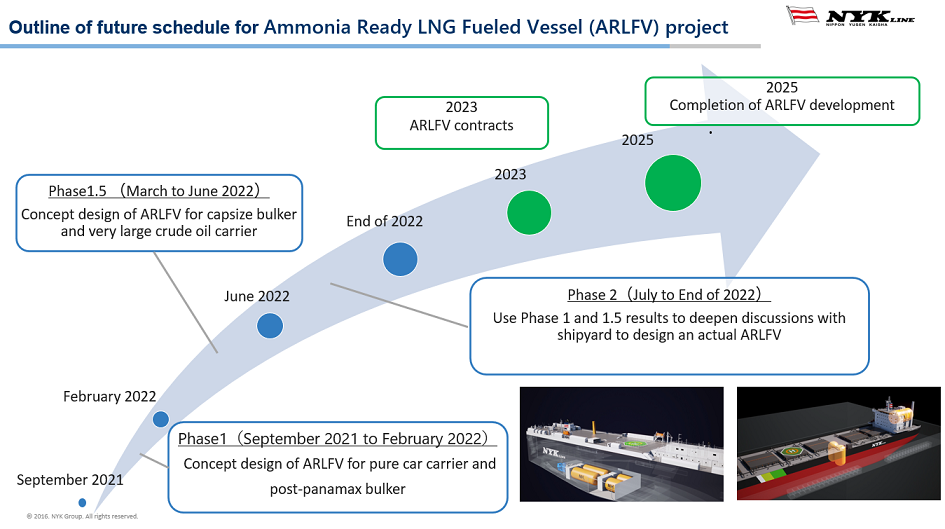 Outline of future schedule of this project

On February 3, 2021, NYK released the “NYK Group ESG Story,”* which aims to further integrate ESG into the company’s management strategy and promotes activities that contribute to the achievement of the SDGs (Sustainable Development Goals) through business activities. To strongly promote ESG management, the NYK Group encourages new value creation as a sustainable solution provider through a business strategy that includes activities that promote upgrading to a next-generation eco-friendly fleet.