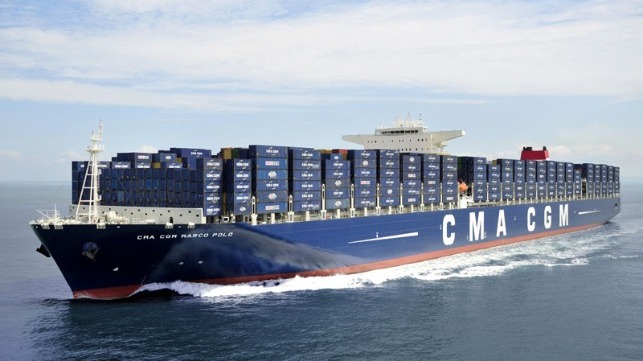 For the second time in less than a year, a containership operated by CMA CGM will set size records as the largest boxship to call at ports along the Atlantic Seaboard. The 16,022 TEU CMA CGM Marco Polo will set a total of seven North American big ship records in 11 days.

The 1,300-foot long boxship is currently crossing the Atlantic due to make its first North American call in Halifax on May 17. It will then proceed to the Port of New York and New Jersey (May 20), Port of Virginia (May 23), Port of Savannah (May 26), and finally the Port of Charleston (May 28). The vessel is being added to the line’s Columbus JAX service traveling from South Asia to the Atlantic Seaboard.

The CMA CGM Marco Polo has a capacity approximately six percent larger (measured in TEU) compared to the CMA CGM Brazil, which in September 2020 also claimed the title of the largest containership to call on North America’s Eastern Seaboard. The vessels, however, are significantly smaller than the largest containerships to call on the North America Pacific Coast and the new generation of ultra-large containerships, such as the CGM CMA Jacques Saade introduced in 2020 with a capacity of 23,000 TEU, which are operating between Asia and Europe.

According to CMA CGM, the debut of CMA CGM Marco Polo is in response to the need for increased capacity on the route. They noted that many of their U.S. customers are experiencing unprecedented boosts in e-commerce sales resulting in an increased demand for goods.

“The deployment of the CMA CGM Marco Polo is yet another indicator of our flexibility and commitment to delivering the essentials that keep America moving,” said Ed Aldridge, President of CMA CGM America and APL North America. “It is also important to mention that this milestone would not be possible without the efforts of our port partners on the East Coast. Their intelligent, timely infrastructure improvements to support larger ships make it possible for us to proactively respond to the needs of our customers.”

When the CMA CGM Marco Polo was christened in December 2012, she was reported to be the largest containership in the world. Built Daewoo Shipbuilding and Marine Engineering in South Korea, the 187,625 dwt vessel was the first of three the company was building for its route between China and Europe. These vessels were recently surpassed by the new ultra-large LNG-fueled containerships CMA CGM began introducing in 2020.

“The Marco Polo’s arrival at our seaport underscores the Port of New York and New Jersey’s ability to serve the ultra-large cargo container ships that increasingly carry the food, supplies, and goods needed to sustain millions of residents, support thousands of jobs and keep businesses open,” said Rick Cotton, executive director of The Port Authority of New York and New Jersey. “The Port Authority’s infrastructure improvements such as the raising of the Bayonne Bridge and the deepening of the navigational channel serving our seaport have made possible this historic moment. These infrastructure improvements also have helped generate record cargo volumes and enabled our supply lines to remain extraordinarily robust during the pandemic.”

Ports along the Atlantic Seaboard have been working to expanding and enhance their facilities to accommodate larger vessels. The CMA CGM Marco Polo is operating with an approximately 46-foot draft. Many of the seaports have been deepening and improving their navigation channels to accommodate these ships. Halifax, where the CMA CGM Marco Polo will be making her first call also recently lengthened the pier at its container terminal specifically to handle post-Panamax vessels.