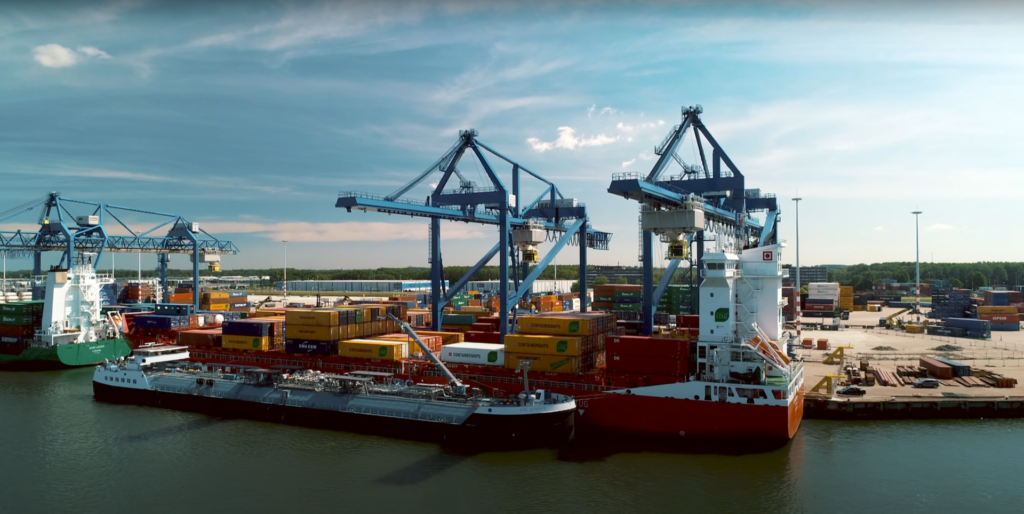 Containerships Aurora, a 1,400 TEU LNG-powered vessel, was bunkered by Shell with a nearly 10% blend of low carbon BioLNG while calling at Rotterdam.

The bunkering operation was performed by the barge LNG London at the Rotterdam Short Sea Terminals (RST).

According to CMA CGM, the operation was successfully conducted by means of a ship-to-ship transfer while the boxship carried out cargo operations simultaneously, ensuring schedule integrity.

Bio-LNG, a new and immediately available solution on the path to carbon-neutral shipping

Shell’s BioLNG offering, combined with the dual-fuel gas engine technology developed by CMA CGM, has the potential to further reduce greenhouse gas emissions (including carbon dioxide) by at least 67% well-to-wake (the complete value chain) compared to VLSFO, the duo said.

Produced from agricultural and industrial food waste, BioLNG has demonstrated the future potential of the BioLNG supply chain. Results from the trial will give the maritime sector a vital demonstration into the scalability, sustainability and technical compliance of BioLNG.

Biomethane and e-methane, non-fossil energies to play a key role in the energy transition

The CMA CGM Group’s dual-fuel gas vessels, which operate today with LNG and biomethane, already have the technical capability of using e-methane (instead of LNG), a source of carbon-neutral fuel.

This “e-methane ready” fleet consists of 20 vessels already in service and a total of 44 vessels by the end of 2024.

In addition to this new milestone in the use of BioLNG for shipping, CMA CGM supported in 2021 the production of 25,000 tonnes of biomethane (equivalent to a year’s fuel consumption of four 1,400-TEU LNG-powered ships), which in turn supports Shell to develop production capacity to further accelerate the availability to a wider market.

“We look forward to assessing how the supply chain might be scaled to enable LNG to become a viable carbon neutral marine fuel.”

“CMA CGM believes LNG is one of the first steps towards achieving our target to achieve net zero carbon by 2050. LNG-powered vessels enable to reach, as of today, step 2 of this process which is the use of BioLNG,” Farid Trad, Vice President of the CMA CGM Group, Energy transition and Bunkering, noted.

“The group is heavily investing in research and development alongside its industrial partners to identify the energy sources of the future with the aim of achieving total decarbonation.”

In July this year, CMA CGM teamed up with EveRé, Elengy and TotalEnergies to study the feasibility of creating France’s first production unit for BioLNG.

What is more, earlier this month, CMA CGM and ENGIE committed to working together to advance the energy transition by championing the industrial-scale production and distribution of synthetic methane and BioLNG. The cooperation has the ambition to support the development of a synthetic methane production and distribution industry that can be used by the shipping sector.