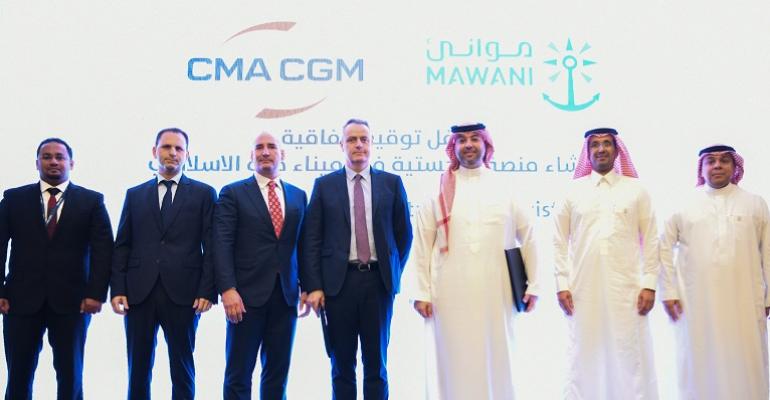 In a joint statement on Monday, CMA CGM said it is investing $130m over a two-decade period to strengthen its presence in Saudi Arabia and the Middle East region. CMA CGM Inland Services (CCIS), the Group’s inland transportation solutions development arm, and logistics subsidiary, CEVA, assisted with the project.

“It will also enable our Group to expand its regional shipping and logistics network, where we see a lot of growth potential,” he said.

CMA CGM acquired Switzerland-based CEVA Logistics, which saw revenues of $12bn in its latest reporting period, and has a workforce of 98,000, in 2019.

In a statement made earlier this year, the SPA said JIP’s specialized facilities included two container terminals with a combined capacity of 7.5m teu, a fully integrated logistics village for bonded storage and re-export, and two general cargo terminals.

Its National Transport and Logistics Strategy (NTLS) aims to create specialised logistics zones within the precincts of Saudi ports and beyond in order to position the Kingdom as a global logistics hub.

JIP is now operating more efficiently after the SPA consolidated the number of operators at the facility from three to two in the past two years. Red Sea Gateway Terminal and DP World are now the only two operators at the port, which saw throughput of over 4.7m teu in 2020.

“After nearly a quarter and a half of stable rates, we are starting to again see general rate increases entering the market, likely in preparation of the earlier-than-usual Ramadan holidays this year.” Ramadan is scheduled to begin on around 2 April.