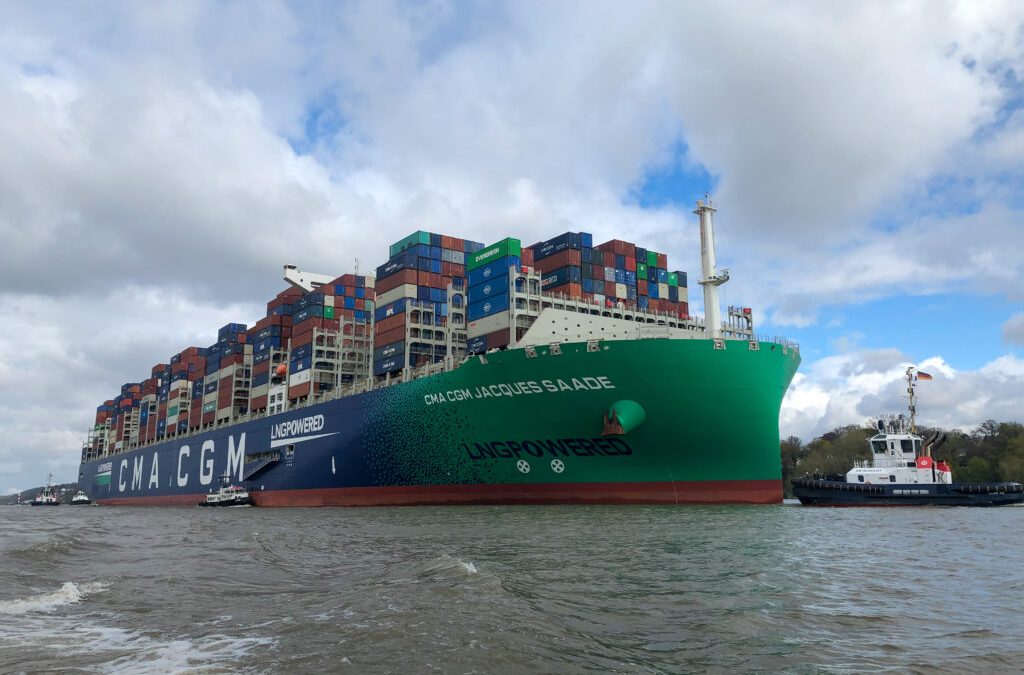 On 5 May, the 23,112 TEU CMA CGM Jacques Saadé made its first official voyage through the deepened and widened navigation channel, heading for the Port of Hamburg.

With a length of 400 metres and a breadth of 61 metres, this containership giant is one of the vessels immediately able to utilize an improved draft. This means that the ship can bring around 1,000 more containers to Hamburg.

The Lower and Outer Elbe channel draft has been widened by 90 centimetres – now going up to 13.10 meters. A ‘passing box’ has been created between Wedel and Blankenese, enabling especially wide seagoing vessels — such as 23,000+ TEU boxships — to meet and pass.

The release of the new drafts by Hamburg and federal nautical agencies is being implemented in two stages. With Wednesday’s go-ahead for the first, containerships may utilize up to 50 percent of the draft improvements gained by fairway adjustment. Depending on ship size, drafts rise by between 30 and 90 centimetres. The final release is anticipated during the second half of the year.

“A fine day for the environment, since the fairway adjustment gives a significant boost to the seagoing vessel as an environmentally compatible and climate-friendly means of transport,” Michael Westhagemann, Senator of Economics for the Hanseatic City of Hamburg, pointed out.

“Along with shipping & logistics group CMA CGM, today the Port of Hamburg has made history. We now have optimal conditions for receiving the world’s largest container ships. I especially wish to thank the WSV for its close cooperation. This made a decisive contribution to a fairway adjustment reconciling economic necessities and ecological concerns,” Jens Meier, CEO of Hamburg Port Authority – HPA, said.

As explained, unfavourable fairway conditions and restrictions in the past led to an increased transport costs, and Port of Hamburg, therefore, being less competitive. However, with this move, other projects can look up to this groundbreaking work.

“Completion of the fairway adjustment on the Lower and Outer Elbe now allows not only passing by larger ships in the section before Hamburg, but also higher draft. That is an excellent signal for our port customers. Shipping is now able to completely utilize the Elbe’s new depth and breadth,” Axel Mattern, Joint CEO of Port Hamburg Marketing – HHM, said.

“In addition, the fairway adjustment opens up new areas of business for the port, which will now be able to handle considerably weightier export cargo.”

The final work on the Elbe river bed was finished by Fernão de Magalhães dredger ensuring a simpler and more effective traffic flow.