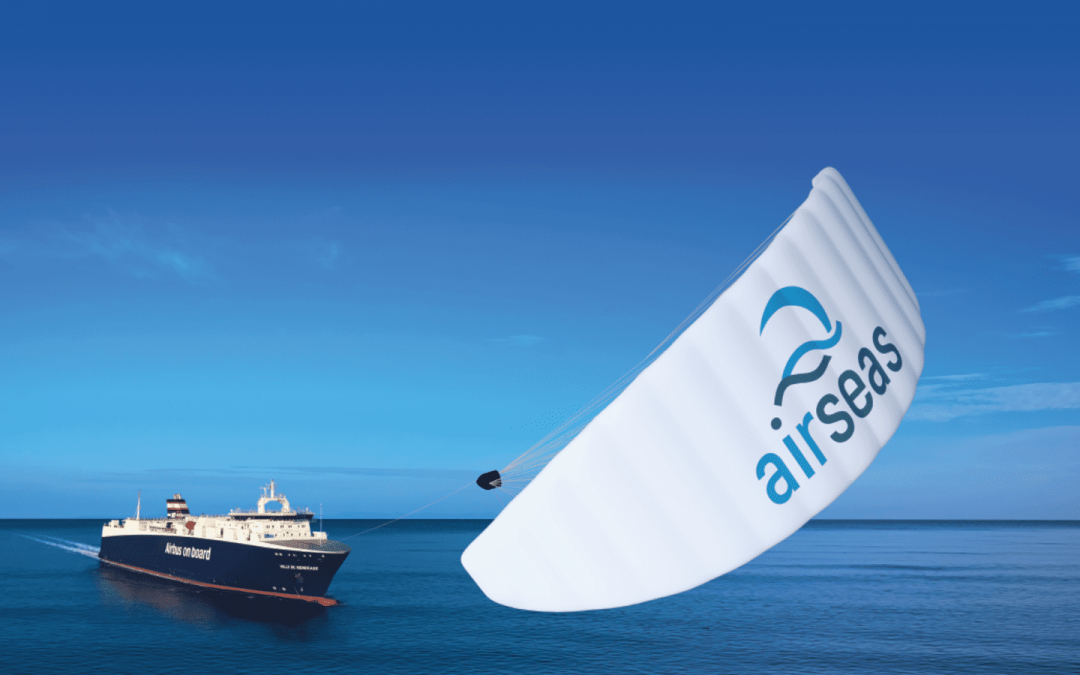 International trade is still heavily reliant on oceangoing vessels and the noxious bunker fuel that feeds most ships’ massive diesel engines.
To this point, critics say the shipping industry has made only lackluster efforts to go green, but there is a new push to cut back on carbon-emitting fuels and shift to things like liquid hydrogen or ammonia, and many cutting-edge designs using the oldest power source: wind.
With companies like Amazon, Ikea, Unilever and other major movers of cargo seeking ways to meet their greenhouse gas reduction goals, shipping is a prime target.

The shipping industry accounts for nearly 3% of the world’s total greenhouse gas emissions, producing as much manmade carbon dioxide as all the coal-fired power plants in the U.S. combined. Still, it’s a relatively small output within the overall transportation sector, which is responsible for 37% of annual global greenhouse gases.

Yet as international trade continues to grow and heavily rely on oceangoing vessels to move cargo — they currently carry more than 80% of it — some scientists warn that by 2050 shipping could account for 17% of greenhouse gases.

That’s why, after years of lackluster efforts to decarbonize, the industry’s regulatory body is getting on board. In 2018, the International Maritime Organization, or IMO, a London-based United Nations agency comprising 175 member countries — many with delegates directly tied to businesses resistant to curbing emissions — adopted a strategy to reduce greenhouse gases by 50% by 2050 compared to the 2008 level.

Critics say that goal is too little and too late, insisting the IMO reset its target to 100% decarbonization by mid-century, or preferably sooner.

“The IMO has been rather late to the party, in terms of developing climate measures and coming up with a strategy,” said Lucy Gilliam, shipping policy officer at Seas at Risk and a board member of the Clean Shipping Coalition, both environmental NGOs. She cited the fact that international shipping is not included in the Paris climate accord. Plus, a recent study found that only 33 out of the 94 largest shipping companies have a clearly expressed policy to achieve net-zero emissions by 2050 and/or have committed to the IMO’s goal.

Nonetheless, the private sector is undertaking some initiatives to lessen its climate impact. The simplest solution would be for ships to simply slow down, thus using less carbon-emitting fuel. Shipbuilders are also experimenting with hulls coated with air bubbles to reduce drag, as well as sleeker bows, more efficient engines, propellers and thrusters, and AI-assisted navigation systems.

Meanwhile, the industry is beginning to establish green corridors, or specific shipping routes and ports that support zero-emission solutions and policies. The financial world is joining the decarbonization movement as well, with 29 institutions signing onto the Poseidon Principles, an agreement to consider efforts to cut greenhouse gas emissions when lending to shipping companies. The signatories represent more than $185 billion in loans to international shipping — nearly half of the global ship finance portfolio.

But with a global supply chain designed for speedy deliveries, the big breakthrough bets are being made on the development of low-emission or zero-emission fuels — including green methanol, hydrogen, liquid natural gas (LNG) and ammonia — to reduce or replace the molasses-thick, noxious bunker fuel that feeds most ships’ massive diesel engines.

These efforts include electric propulsion, several wind-power technologies and nuclear energy, which has driven naval vessels since the mid-1950s and is getting some attention as it generates zero emissions, though safety and security concerns are major impediments.

Here’s an overview of the biggest bets being placed on low-carbon and no-carbon breakthroughs in ocean shipping.

Denmark’s A.P. Moller-Maersk, which moves 17% of the world’s shipping containers, has 13 ships on order from South Korea’s Hyundai Heavy Industries that run on green methanol. The first, a small vessel with a capacity to carry 2,000 containers (the largest such ships transport 24,000 containers) will launch next year and operate in the Baltics and northern Europe, said Lee Kindberg, Maersk’s head of environment and sustainability in North America.

“Beginning in 2024, every quarter we are going to launch two 16,000 TEU vessels that will operate on transpacific routes,” she said, using the logistics acronym for twenty-foot equivalent unit, the standard measurement of 20-foot-long containers. “Our current commitment is to go to net-zero carbon shipping by 2040.”

Most of the methanol produced today is derived from fossil fuels, but Maersk, CMA CGM and other leading shipping companies are testing two different green, carbon-neutral versions. One is made from solid and liquid biomass extracted from agricultural and forest residues and farming and poultry waste. The other is e-methanol, made by combining CO2 with hydrogen produced from water using renewable electricity. Both are liquids that can be safely stored in non-pressurized tanks at ambient temperatures. Although more expensive than bunker fuel and in limited supply, green methanol can be mixed with bunker in dual-fuel engines to effectively lower carbon emissions.

Liquid hydrogen is another fuel option, often touted because it produces almost no carbon emissions when combusted. Yet about 95% of hydrogen is produced by reforming natural gas or other fossil fuels. It can be made renewably, however, by splitting water using energy from solar, wind, nuclear and hydro power. Green hydrogen can be used in a ship’s internal combustion engine or in fuel cells that generate emission-free electricity. And it may become a cheaper and more attractive alternative due to production tax credits included in the Inflation Reduction Act.

The Washington, D.C.-based International Council on Clean Transportation conducted a study in 2020 on the potential of using renewable hydrogen fuel cells to power container ships servicing the busy corridor between China and the San Pedro Bay near Los Angeles. “Without making any other changes to the vessels, around 43% of the voyages made in 2015 could be made with that technology,” said Xiaoli Mao, a senior marine researcher at the nonprofit organization. “And with minor adjustments to ship design or adding one more refueling stop, 99% could be realized.”

LNG as an alternative fuel source
LNG tops the list of alternative fuels currently used in commercial ships, including some large container vessels, according to Clarksons Research, a shipping analytics firm based in London. Although less than 5% of the current cargo fleet of around 55,000 ships can run on lower-emission fuels, 38% of new builds will have the option, up from 28% a year ago and 12% five years ago. LNG will power nearly a third (741) of those new vessels, while 24 will run on methanol and six on hydrogen.

The knock on LNG for shipping is it’s still a fossil fuel that emits methane and requires considerable capital investment for retrofitting existing engines and fuel tanks. What’s more, it would extend the use of carbon-based fuels for at least another 20 years, which is a typical lifespan for large ships.

Green ammonia
Ammonia is garnering attention, too. It’s in abundant supply and can be used in dual-fuel engines and fuel cells. As with hydrogen, most ammonia is derived from fossil fuels and its production releases considerable CO2, though it be made environmentally friendly by combining green hydrogen with nitrogen from the air. Safety is the biggest concern, because ammonia is dangerously toxic to humans and marine life, which could dissuade ports from storing it.

Last December, LMG Marin, a subsidiary of Singapore’s Sembcorp Marine, agreed to design what it describes as the first green ammonia-fueled tanker for a unit of Norway’s Grieg Maritime Group. Planned for launch in 2024, the MS Green Ammonia will, appropriately, transport green ammonia.

On a larger scale, in June, Mitsubishi Shipbuilding, part of Mitsubishi Heavy Industries, announced the completion of the conceptual design of a very large gas carrier (VLGC) initially powered by liquefied petroleum gas (LPG), but adaptable for future use of ammonia as the main fuel. The Tokyo-based shipbuilder previously built more than 80 VLGCs, and the new design will allow retrofitting of those vessels to run on ammonia.

Electric robo-ships
Mitsubishi’s designers are also pioneering electric-powered ships with a vessel called Roboship, which will be built by Honda Heavy Industries and launched next year. The 550-ton ship will replace a conventional diesel engine with a hybrid-electric system, including storage batteries, propellers, motors, switchboards and generators. The digital platform used to control the electric propulsion equipment was developed by e5 Lab, a Tokyo startup promoting electric propulsion and digitization of ships.

e5 is collaborating with another Japanese shipbuilder, Asahi Tanker, to build a pair of all-electric, zero-emissions tankers, powered by large-capacity lithium-ion batteries. The workload of the bunker vessels’ crews will be lightened with automated equipment and digital tools. The first model delivered marine fuel to ships in Tokyo Bay in April, with the second scheduled to begin operating next year.

The rise of electric boats
As with electric cars, travel range and battery charging are issues with e-ships, so they’re being designed for short, local voyages. Electrified ferries, pilot boats and cruise ships are showing up in ports and harbors in Japan, Sweden and Denmark.

The return of wind-powered cargo ships
Of course, the earliest cargo ships sailed the seas solely under wind power, a concept being modernized today.

“There are currently 20 large vessels under some wind-assisted technology,” said Gavin Allwright, secretary for the London-based International Windship Association. They include tankers, bulk carriers and vehicle transporters, he said, which have enough deck space to accommodate different systems.

The front-runner, Allwright said, is the Flettner rotor system, a concept invented by Anton Flettner in the 1920s. It features tall, smokestack-like cylinders, mounted on a ship’s deck, that rapidly rotate with the wind and thrust the vessel forward. Among recent applications, the Australian mining company BHP is partnering with Pan Pacific Copper and Nippon Marine to test a rotor sail system aboard a bulk carrier.

Cargill, the food and agriculture behemoth that charters more than 600 dry bulk carriers, is set to test a ship outfitted with WindWings, solid sails designed by BAR Technologies. “Through this partnership we will bring bespoke wind solutions to customers who are actively seeking to reduce CO2 emissions from their supply chain,” said Jan Dieleman, president of Cargill’s Ocean Transportation business. The company reportedly plans to charter at least 20 new wind-assisted ships in the coming years.

Airseas, the maritime unit of France’s Airbus, has developed a gigantic, automated kite called Seawing, which essentially tows a ship. The wind-assist technology, Airseas claims, can reduce fuel consumption by an average of 20%. Another French company, Michelin, is testing its inflatable, retractable, automated wing sail mobility prototype on a ferry running between the U.K. and Spain.

Despite its embrace of these various decarbonization projects, the maritime industry will have a tough time weaning itself off fossil fuels. Indeed, Saudi Arabia, the world’s largest oil exporter, is financing some of the IMO’s green shipping efforts. But as Amazon, Ikea, Unilever and other major movers of cargo seek ways to meet their net-zero goals, shipping is a prime target.

“If they want to reduce their emissions,” said Maersk’s Kindberg, “they need us to reduce ours.”