Chinese Shipbuilders To See Surge In Orders This Year 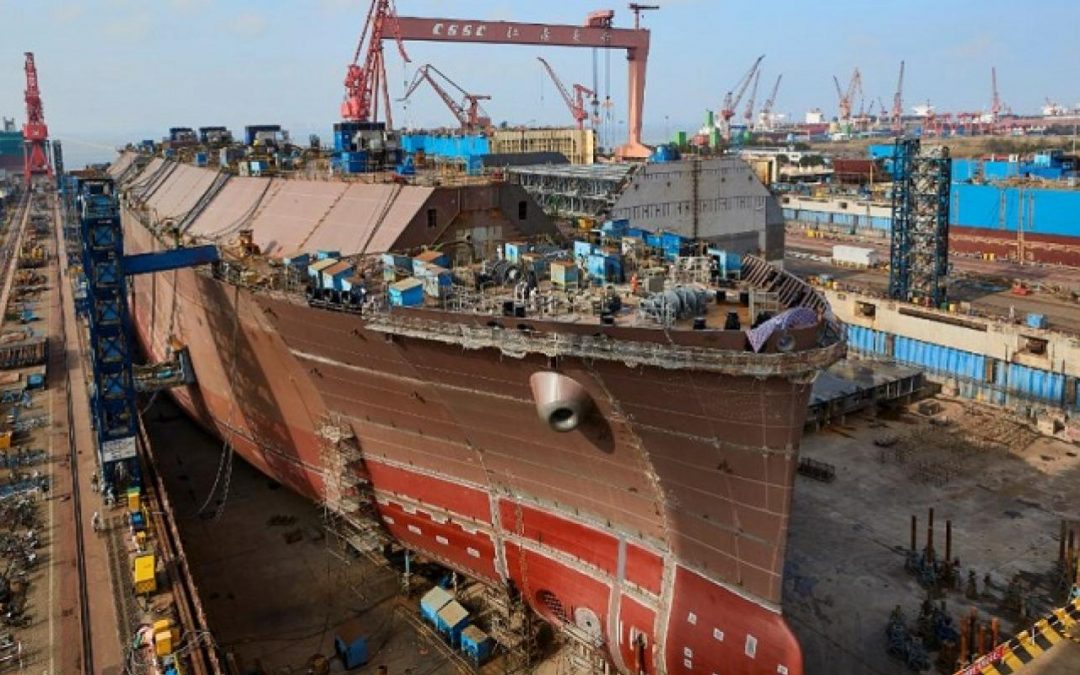 Chinese shipyards completed orders of 23.18 million dead weight tons (DWT) for both domestic and foreign shipowners in the first half, accounting for 47.4 percent of the world’s total in this area, data released by the Beijing-based Chinese Association of the National Shipbuilding Industry showed.

In the meantime, they received new orders of 28.39 million DWT, taking up 43.6 percent of the world’s total in this category. Their executed orders amounted to 80.96 million DWT during the six-month period.

With the growth rate of maritime trade exceeding the fleet growth rate of the Baltic Dry Bulk Index, a shipping index measuring the change in the transportation cost of raw materials, exceeding 3,500 points, this ends the long-term downturn in the shipping market over the past 10 years, said Li Yanqing, CANSI’s Secretary-general.

“There will be many orders in the second half, and global annual new ship transaction volume will definitely exceed 90 million DWT,” Li said. “Therefore, we have reason to believe that a new shipbuilding cycle has begun.”

“We currently have reached the number of orders seen for the whole of last year. These ship orders were placed while many major shipping companies announced new orders in the past few months, even as freight costs for container ships reached historic highs,” he said.

Qu Rongze, Vice-president of Dalian COSCO KHI Ship Engineering Co, a joint venture formed by China COSCO Shipping Corp and Japan’s Kawasaki Heavy Industries Ltd, said the company has gained orders of more than 20 bulk and container vessels so far this year, and its production plan has been filled up to the beginning of 2024.

Even though the company no longer worries about orders, the increase in steel prices this year has put heavy pressure on its operations as it usually takes 10,000 metric tons of steel to build a large-size bulk carrier, Qu said, adding that his company has had to negotiate the supply price with steel plants every quarter since October last year.

Steel accounts for more than 20 percent of total shipbuilding costs and is the most costly part in the whole process. As the price of steel has risen by 50 percent since the beginning of the year, the 10 percent increase in ship prices this year has not brought substantial improvement to the earnings of shipyards, at least for the next year, he said.

As the International Maritime Organization, a specialized agency under the United Nations responsible for regulating shipping, has issued a series of new standards for carbon energy efficiency and various indicators of ships in recent years, this reality has pushed a large number of shipping companies to speed up the replacement of their older ships.

Under such circumstances, China’s shipbuilding industry has been adopting new technologies to achieve green transformation. Alternative fuels have now become the most important area of technological innovation in the shipping business, such as engines powered by ammonia, liquefied natural gas, and methanol, as well as hydrogen-powered engines in the future.

Many Chinese shipyards have accelerated the development pace of intelligent manufacturing and high-end ships, said Dong Liwan, a Professor of shipbuilding at Shanghai Maritime University.

“From a long-term perspective, self-driving and smart vessels are future directions. Domestic shipbuilders need to grasp the opportunities to catch up with global rivals in the field,” Dong said.