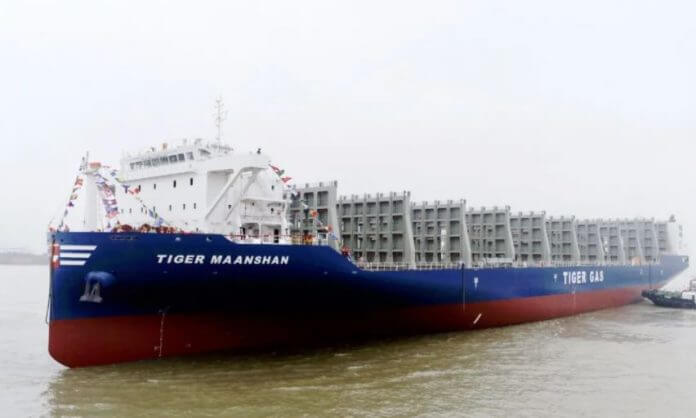 China, which is a major energy importer, is preparing to take an important step forward launching a unique approach to the importation of LNG. Yangzijiang Shipbuilding Group recently completed the float out of the second of two vessels, which it is calling the world’s largest LNG tank container transport dual-fuel cargo ships. The shipbuilder expects to deliver the first vessel in the next few weeks and both will be used to launch an LNG import business.

The 250,000 dwt Tiger Maanshan was moved from the construction dry dock on November 5 to prepare for its sea trials. The Tiger Longkou had previously been floated and completed testing in October. Based on the success of the efforts, the shipyard now reports that it has advanced the delivery date for the Tiger Longkou with the vessel scheduled to be handed over in December 2021, four months ahead of schedule. The two ships, along with two others and options for up to four more are being built for Tiger Gas, headed up by Gerry Wang, the former CEO of Seaspan.

Each of the four vessels will be used to transport LNG, but instead of opting for the traditional LNG carrier, Tiger Gas developed vessels that will transport LNG gas tanks in a fashion similar to containers. Each ship has the capacity to load up to approximately 700 45-foot tanks. They will have a total capacity to transport about 15,000 tons of liquified natural gas.

The vessels measure 630 feet in length with a beam of 121 feet are registered in Hong Kong. They are outfitted with dual-fuel engines and will operate on LNG. The ships will operate at a speed of 16 knots and while powered by LNG will have a range of up to 5,000 nautical miles.

Tiger says that their design will greatly improve the transportation efficiency for LNG, providing a new model which can be expanded to other regions of the world. By loading, individual LNG tanks and providing the vessels with the capabilities to dock at smaller terminals, Tiger plans to provide a door-to-door service delivering LNG directly to end-users. The ships will be able to sail on inland waterways, such as China’s Yangtze River, to reach the customers making it possible for a broader range of businesses to convert to LNG.

The LNG will come from a long-term supply agreement with the Malaysian state-owned Petronas group. Tiger has built a filing and distribution center for the LNG tanks in Bintulu Port, Malaysia adjacent to Petronas’ MLNG plant.

Tiger completed the first test run for its system using two LNG tank containers in May 2020 transported to the Zhengpu port in China. Large-scale operations were conducted in January 2021 when 200 LNG tanks were transported from Malaysia. A second run of 205 tanks was conducted in April 2021.

The Tiger Maanshan is undergoing sea trials and it is expected that it will be delivered in early 2022 followed by two additional sister ships. While Tiger Gas is currently focusing on imports to China, the company’s CEO has said that other routes are also under consideration for expansion, including possibly from Malaysia to Vancouver, Canada.