Certain Criminal Offences That Can Land Seafarers In Trouble 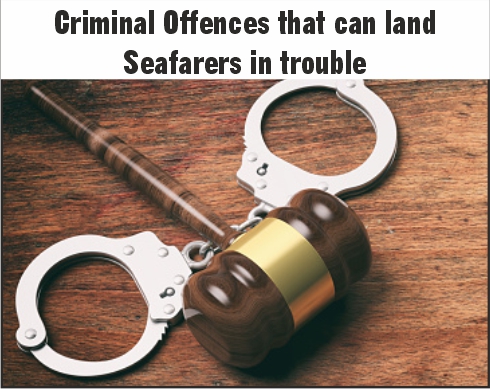 In this edition, we have stated few acts which can land seafarers in a serious predicament and can be considered as an offence under the code of conduct in merchant navy.

Working on a ship is like working on a small floating place altogether, with a limited number of resources. And to maintain the righteous chain of work in such condition, a strict code of conducts ought to be followed on board.

If in case, codes are breached, seafarers might face legal actions or can even have permanent dismissal from his or her sea job.

We have listed down number of acts which are considered severe and can lead to dismissal of the crew if found guilty. (Source: – Marine insight)

Indeed this list is incomplete, there are several other acts that can make seafarer suffer life imprisonment. Such as, conduct of sexual abuse which may harm the dignity of fellow women or men at work or passengers onboard; offending fellow crew members in terms of their religion or nationality; allowing or bringing unauthorized person onboard while at sea and many other.

We as a part of this industry we urge the seafarers not to indulge in any illicit activity that can put you and your family in trouble.