Ceremonial Naming and Launching of Ships 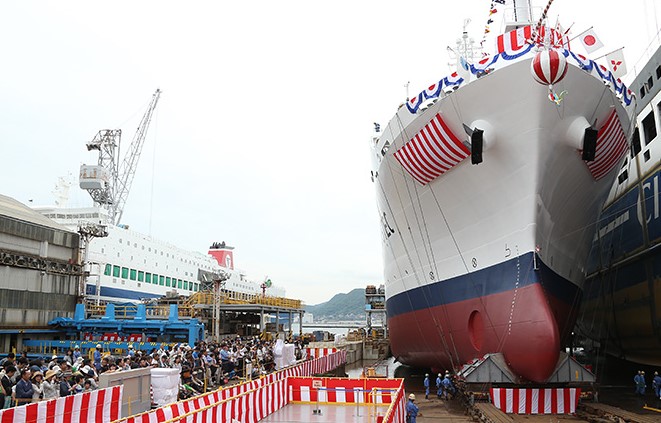 In the era of science and technology, naming a ship might sound a little old-fashioned. A growing inclination towards the facility of ‘quick access’, might make the naming and launching of ships, look like merely a procedure. But naming is more than just a procedure, it is a tradition to be celebrated, a huge event, an identity or recognition that has been provided to the ship before its voyage.

While shipbuilding is a pure science, the naming and launching ceremony dates back to thousands of years considering beliefs, customs and sometimes even superstitions. This simple event is in fact filled with several interesting facts as naming a ship is believed to bring good fortune and safety of the vessel, its crew and passengers all-together. While every civilization has its own tradition, the procedures and practices of launching a ship has evolved over the centuries.

As ships are classified as feminine; earlier, they were often named after goddesses or other mythical figures to protect them during voyage.

While the ceremony was mainly performed by religious men or officials, there are evidences in Babylonian narratives that stated the launching of ships in the 3rd millennium BC. The Romans, Greeks and Egyptians celebrated the ship launching by calling on their gods to protect ships before starting the voyage. Between 8th to 11th centuries, the Vikings’ ship launching ceremony was marked by human blood sacrifice but with the introduction of Christianity, the custom of human sacrifice was obliterated with the sacrifice of goat. During the medieval age, the opening ceremony of ships were marked with the wine instead of the blood sacrifice. The traditions continued to exist today with the only exception of women christening the ships.

As a part of the ship launching ceremony, the ships are decorated with the flags and colorful ribbons while the musicians playing by the side. This event is observed with the official revelation of ship’s name publically. After going through the several trials, the vessel is launched with the present-day custom of breaking a bottle of wine or a champagne by a female. This custom came into being in the 18th century and the Princesses of Hanover was the first ever recorded case. And bottle failing to break is termed as a bad luck.

The naming of ship is merely a decision of the owner, but the procedure for new military vessels differ from country to country.

While launching of ships has been a significant practice held at the shipyard, there are various methods to launch a ship into the waters. The most popular and oldest method is End-On Launch method, it refers to the sliding of ship into the water with its stern entering the water first with the assistance of slipway.

Another method is Float-Out method where ships build in basins or dry docks are floated by depositing water into the dock. While this method has been discontinued in modern shipping, it was widely used earlier.

Coming into existence in 19th century, the Slide Launch method was broadly adopted during the World War – II. In this method the ship enters the water broadside on inland waters, rivers and lakes.