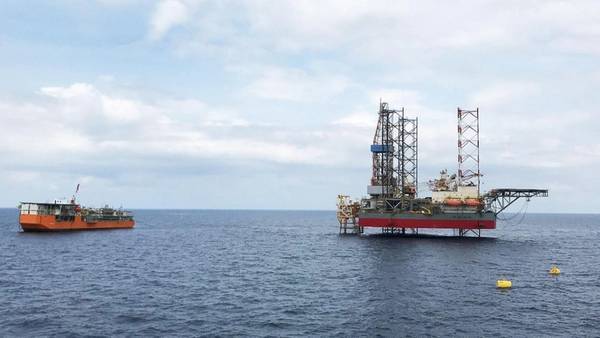 When Cambodian officials commemorated the start of the country’s first oil project in June by preserving the first drops of production at a high-profile ceremony, they heralded the country’s emergence as a budding oil exporter at the heart of Asia.

But instead of reaping royalties, Cambodia’s government has filed a theft complaint against the crew of the tanker that stored the crude, after they sailed away with the oil amid a payment dispute with the oil field’s developer.

Singapore-based KrisEnergy, which owns a 95% stake in the offshore Apsara field in the Gulf of Thailand, was forced into liquidation shortly after production began in December 2020. Cost overruns and poor oil yields from the project had left the company unable to repay debt.

KrisEnergy’s collapse also ended hopes of further oil sale proceeds for the Cambodian government, which owns the remaining 5% stake. All operations were halted and are deemed unlikely to resume given poor extraction rates, according to a local media report citing the Cambodian Ministry of Mines and Energy in July.

That’s likely to be a major disappointment to Cambodian authorities, who had anticipated roughly $500 million in tax and royalty revenues over the project’s lifetime.

The output stoppage means all there is left to show for Cambodia’s oil production efforts now lies in the belly of the MT Strovolos, the 300,000-barrel tanker that had stored the oil produced at the site until it was forced to divert last month in search of a fresh crew and has now been detained by the Indonesian navy.

The Cambodian energy ministry, KrisEnergy and its liquidators did not respond to requests for comment.

With the fully-laden vessel now impounded in Batam, and KrisEnergy’s liquidation proceedings still under way, lawyers who have been tracking developments predict a lengthy dispute over who owns and can sell the oil.

“I expect that if the Cambodian Government wants to detain the cargo and have it shipped back to Cambodia, there may arise competing claimants who are saying they are lawful owners of the cargo, potentially including the liquidator of KrisEnergy,” said Peter Doraisamy, managing partner at PDLegal LLC.

“It is likely to take several years at the very minimum depending on which jurisdiction is seized of the case, and there is possibility that cases may be brought in more than one jurisdiction and by different parties.”

A key fundamental question is who actually owns the crude cargo, currently valued at around $20 million, now that KrisEnergy has become insolvent.

“The ship owner may not actually know who owns the cargo, and he’s not a party to any of those contracts, he just gets told what to do by the charterer,” said Leon Alexander, partner at Clyde & Co.

“But the shipowner owes a legal obligation to that person who is the cargo owner, he’s got to look after and care for the cargo. And he’s not allowed to deliver the cargo to the wrong person or act in a manner inconsistent with the rights of the cargo owner, or he faces a legal claim in conversion.”

Indonesian authorities have taken steps to secure the vessel and its contents for investigation, Laode Muhamad, a spokesman for the Indonesian Navy told Reuters.

“Based on the provisions of the shipping law, the ship and its documents and cargo are evidence for which approval for confiscation is requested for investigation purposes,” he said.

While legal manoeuvring around the cargo is just getting under way, oil analysts say production at the field will likely remain stopped, even with the recovery in oil prices and demand this year.

“I suspect that the shadow of Apsara will hang over Cambodia’s hydrocarbon attempts for some time.”