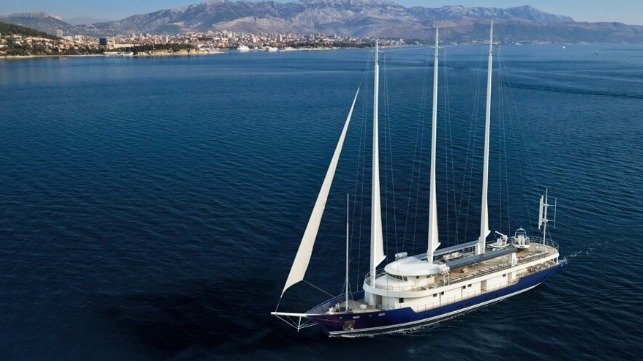 The Brodosplit shipyard in Croatia along with its parent company the DIV Group and scientific institutions have begun work on a zero-emission ship that will combine sails with batteries recharged during operation that will create the first fully sustainable passenger ship. Research and development have been underway for the past two years, in part supported by the EU, and yesterday the yard symbolically marked the beginning of construction.

The goal of the project was to research, develop, and build an eco-friendly sailing vessel using alternative propulsion technologies and energy sources to achieve sustainable mobility with zero emissions. They developed a design that supports environmental sustainability while reducing greenhouse gas emissions and air and noise pollution.

Called the electric sailing ship, Brodosplit will build a vessel that has been optimized for 24 passengers. It will measure 208 feet in length and have a 33-foot beam. The hull and superstructure will be made of steel, while the masts are made from an aluminum alloy. The primary sources of propulsion will be the sails and when the vessel is not under sail it will be powered by two 150 kW electric motors. Power for the motors will come from 30 tons of batteries with a maximum capacity of 2300 kWh. Due to legal requirements, the vessel will also have two diesel generators, but they anticipate only using them in emergencies.

When the vessel reaches a speed of six knots, they estimate it will require only 60 kilowatts of power.  According to the design team, that is “fairly unobtrusive for a 500 gross ton vessel.” However, what makes the vessel unique is that the batteries will be continuously charged from a range of sources while it is underway.

The faculty of Electrical Engineering, Computer Science and Information Technology in Osijek was responsible for the development of kinetic wind energy storage systems that use hydrokinetic energy conversion along with battery management systems integrated with marine energy systems to manage the operation of the vessels. The faculty of Electrical Engineering, Mechanical Engineering and Naval Architecture in Split is working on sailing systems, sail automation (robotics), wind turbines, and photovoltaic systems for the vessel.

Several systems will be combined to charge the batteries and maintain the operations of the zero-emission ship. There will be two vertical wind turbines at the bow and stern that will supply the ship with electricity when it is in port and the sails are lowered. In addition, a photovoltaic solar system will be installed on the roof of the superstructure.

Charging of the batteries while underway will be achieved in part from the wind turbines and the solar panels as well as the use of a water turbine. A system of propellers with variable pitch and a special blade geometry will create the water turbine when sailing. The “reversible propeller” will provide power that will be used to charge the batteries.

The information and management systems will incorporate meteorological data feeding information to the bridge about the most favorable wind conditions while monitoring the ship’s operations and propulsion systems. It will also be monitoring and analyzing the operation of the engines, solar panels, wind turbines, hot water, and energy consumption to optimize operations.

Brodosplit did not announce when the vessel would be completed but says that it is a highly versatile design. They anticipate the vessel would sail along the coasts of Croatia, Italy, Slovenia, Montenegro, Albania, and Greece in the Adriatic during the tourist season, and would sail in the Caribbean and other tourist destinations in the other seasons.