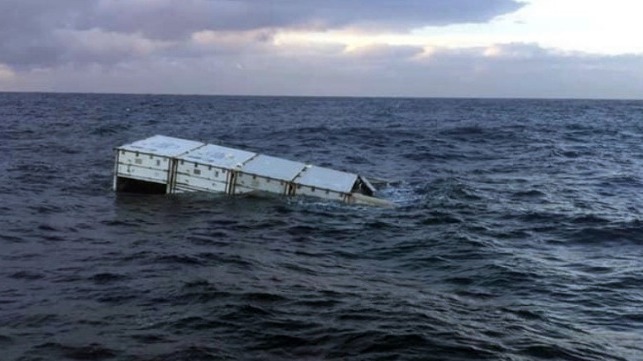 British authorities are warning ships operating in the Bristol Channel that a container ship lost several containers that it was transporting overboard near Land’s End, England. The containers have been spotted floating in the waterway as a hazard to ships and are also washing up on the shoreline.

Her Majesty’s Coastguard continues to monitor the incident involving shipping containers now adrift in the Bristol Channel. According to a statement, they believe that 11 containers were lost overboard from an unnamed vessel. The containership reported to authorities that it had lost 11 boxes overboard on October 20, six of which were empty and five contained non-hazardous cargoes.

The Maritime & Coastguard Agency’s counter pollution team, Trinity House, the ship’s insurers and a number of commercial contractors, including chartered vessels, are reported to be engaged in searching and recovery. The MCA’s specialist fixed-wing aircraft has been conducting overflights of the area, to assist in the tracking of containers still adrift.

One of the containers washed ashore in an area called Bucks Mills, north of Devon in England on October 26 according to HM Coastguard. Devon Live reported that the container that washed up on the beach was “full of nappies and other sanitary products” and the local volunteers had been out to collect the debris to prevent it from washing back into the sea.

This morning (October 27) HM Coastguard reported that a vessel managed to secure a tow to another one of the containers despite difficult weather conditions. Another container was reported to be ashore near Porthcawl. The authorities, including Devon and Cornwall Police, were notified and the Bideford Coastguard Rescue Team was sent to the scene to escort the salvage contractors.

The British authorities also believe that several of the containers may have sunk as not all have been seen during vessel and aircraft searches.

Local shipping alerts are being issued by HM Coastguard to advise other vessel traffic in the area and contingency arrangements are under way for container recovery with salvage contractors.