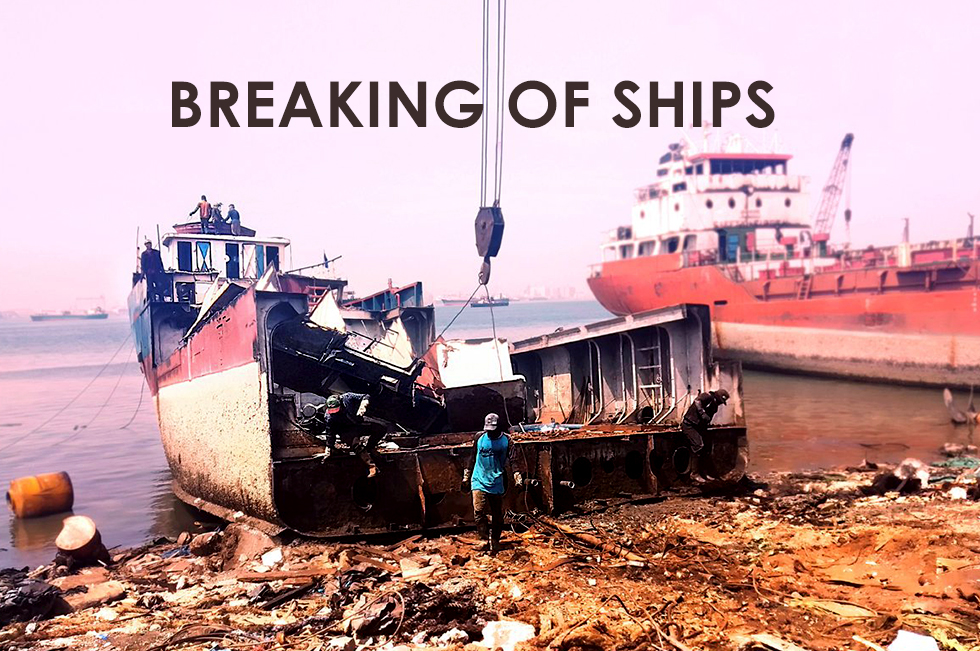 In this blog we are going to take you through an adventure of ship breaking. Ship breaking is a process which is also known as ship deconstruction, ship demolition, ship dismantling, or ship cracking. A ship is broken down to provide parts and raw materials, primarily scrap metal. The raw materials can be extracted using these methods of ship disposal. In modern ships, corrosion, metal fatigue and a lack of parts lead to economic inefficiency after 25 to 30 years. It is possible to recycle materials from ships, including steel, and turn them into new products after they are broken up.

This lowers the demand for mined iron ore and reduces energy use in the steelmaking process. Fixtures and other equipment on board the vessels can also be reused. While ship-breaking is sustainable, there are concerns about the use by poorer countries without stringent environmental legislation. It is also labour-intensive, and considered as one of the world’s most dangerous industries.

The legal requirements for sustainable ship recycling have become a pressing issue for all ships, no matter if they are brand new or very old. Namely, the regulatory scheme with respect to safe and sound recycling of ships consists of two major regulations which are EU Ship Recycling Regulation and Hong Kong Convention.

The EU Ship Recycling Regulation states a key requirement for EU-registered and all EU-visiting ships above 500GT which is to have a certified Inventory of Hazardous Materials (IHM) onboard until the end of any particular year.

Whereas, Hong Kong Convention which will not enter into force until at least 15 countries ratify it. So far, Norway, Congo, France, Belgium, Panama, Denmark and Turkey have ratified the Convention.

Both the EU SRR and the HKC impose responsibilities on ship owners, ship recycling facilities (SRF) and authorities with respect to safe and sound recycling of ships.

Further there are 8 steps for the Sustainable Ship Recycling procedure.

In addition to the clause to meet the requirements as per the HKC and/or the EU SRR and its guidelines, the IHM, ship recycling facility plan (SRFP), SRP, SoC and IRRC should be listed above all. Moreover, a SRF monitoring programme should be mentioned.

The IHM needs to be ship-specific, should be prepared by a qualified expert and cover all 13 or 15 substances listed in the regulations.

The SRP should be developed according  to MEPC.196(62), refer to a specific SRF, reflect the specific IHM and provide licensed dis­posal and recycling solutions for all materials listed in the IHM.

The SRP requires the Competent Authority (CA) of the recycling State’s approval. Explicit approval shall be with written notice of the result and tacit approval shall specify the end date of a 14-day review period. An expert assessment of the SRP is recommend­ed until the regulations are fully applicable.

The SRF forwards the approved SRP to the shipowner. The SRP should contain the final version of the IHM.

The final survey shall be conducted before the recycling ac­tivity starts. The survey guidelines (MEPC. 222[64]) should be followed. After the successful survey, an IRRC can be issued. The documents to be submitted for the survey include the IHM (Parts I, II, and III), the approved SRP and a copy of a valid SRF document of authorization of ship recycling (DASR).

The SRF launches the start of the ship recycling with the submis­sion of the IRRC to the CA.

After completion, the SRF issues an SoC together with a report on accidents damaging human health and the envi­ronment and reports this to its client and CA. All involved stakeholders receive a copy of the SoC.

Although there are mandatory procedures to be followed, there are different types of ship breaking wherein each ship is dismantled depending upon the process.

Stay tuned to know about the ship breaking and its different types.